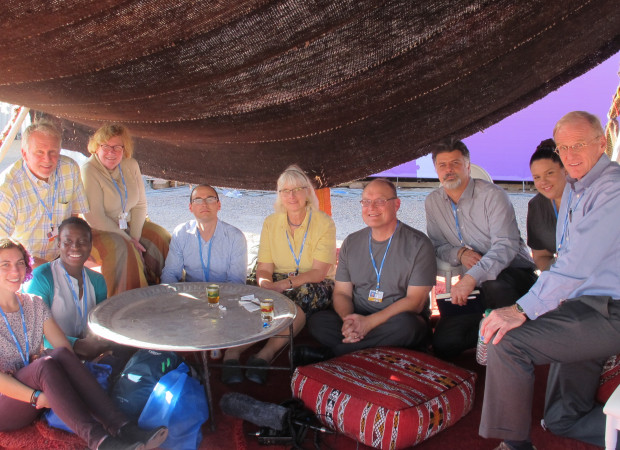 Moravian College dean Diane Husic (C), with Drexel University professor Franco Montalto (third from right) sit with a group of students and professors from Pennsylvania universities under a tent at the climate conference in Marrakech, Morocco, Nov. 17, 2016. Although all were disappointed by the election of Donald Trump, they say the conference has inspired them to work even harder on climate change issues.

The climate change conference in Morrocco ended over the weekend with an urgent message to president-elect Donald Trump – join the battle against global warming or risk contributing to catastrophe and moral failure. About 25,000 people attended the gathering aimed at keeping the earth from over-heating, and staving off the impacts like rising seas, droughts and increasingly destructive storms.
When Moravian College professor Diane Husic woke up the morning after election day in Marrakech, she headed to the United Nations climate change conference with a cloud over her head.
“We came in and it didn’t matter what country you were from,” said Husic, “this place was just in a fog. And everyone was coming up to us and saying, ‘did you vote for Donald Trump and what is that going to mean for us?’ I think most of us on Wednesday were in shock and didn’t know what to say.”

Husic is a veteran of these climate change conferences, she’s been bringing students here since 2009.
But she never expected that a man who called climate change a “Chinese hoax” and vowed to pull the U.S. out of the landmark climate agreement etched out in Paris last year, would be leading the country.
But like everyone at the U.N. climate conference in Morrocco, Husic says she quickly switched gears. And is returning home to Pennsylvania energized to act on reducing carbon emissions and improving things in the Bethlehem area. 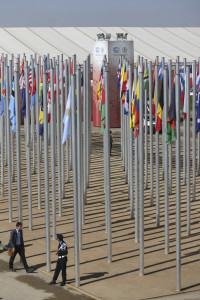 A member of security stands guard outside the COP22 climate change conference, on the last day of the convention that was held in Marrakech, Morocco, Friday, Nov. 18, 2016#39;ab Elshamy / AP Photo

“I think a lot of the change is going to be driven at the local level,” said Husic. “I know in the Lehigh Valley, there’s a lot of groups getting together because flooding is a big problem. It’s the Delaware watershed that we share with Philadelphia. So I think separate of who is in the governor’s office or who is in the White House, a lot of the work is going to be done on the local level.”
There’s a legitimate fear now, that if the U.S., which contributes 20 percent of the global carbon emissions, withdraws from the Paris Agreement, the entire global accord could fall apart.
The U.S. is also one of the wealthiest nations, and as such, has pledged money to help poor nations adapt. If that money dries up, other countries could follow suit.
Husic’s friend Franco Montalto is a professor at Drexel University, and he runs an organization dedicated to helping cities adapt to climate change.
“My message would be, stay calm, stay clear headed, focus on what needs to be done,” said Montalto. “Put your energy into making sure the next elections and the mid-terms, focus on your local elections, making sure you are supporting folks who will really lead into the way we need to be led, not what we’ve been hearing is going to come out of the new administration.”
Sitting under a tent drinking tea in the Moroccan desert, Husic, Montalto and a group of students and professors from eastern Pennsylvania all said they were encouraged by the conference, especially after going through such a divisive election season back home.
“You’ve got 197 countries here all with different priorities and urgencies and yet they can come together, and work not only on getting the Paris Agreement, but now implementing it,” said Husic. “I walked in this morning and saw all the flags displayed and I thought, unity. And I guess that’s the message I’m going back to, that we’re all in this together.”
All the countries attending the conference pledged to continue no matter what Donald Trump decides to do. But they all left Morocco staring into the unknown. The new administration takes power in just a couple of months. And so far, there has been no word from them regarding climate change.
Susan Phillips reported from Morocco on a fellowship from the International Reporting Project (IRP).