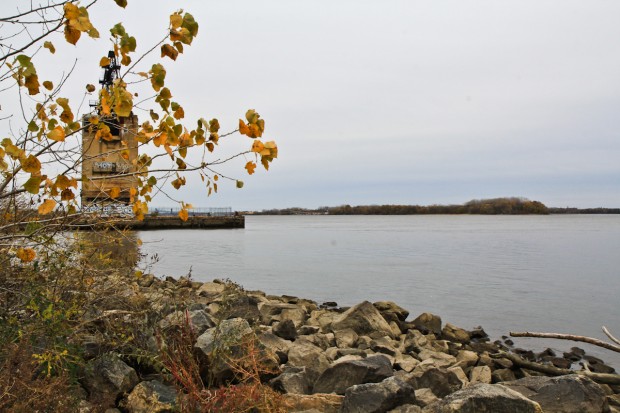 Petty Island in the middle of the Delaware River as seen from Penn Treaty Park in Philadelphia.

Delaware River Basin officials are considering taking emergency measures to release more water into the river to keep downstream pressure on a line of tidal salt that has crept upstream to its second-highest point since a severe drought in the 1960s.
The Delaware River Basin Commission is already releasing water from two Pennsylvania reservoirs to keep the so-called salt front well away from drinking-water intakes in Philadelphia and New Jersey, and is now considering drawing on other reservoirs amid a continued shortage of rainfall.
The commission, which regulates water supply in the basin portions of Pennsylvania, New Jersey, New York and Delaware, sought public input last week on whether to declare a drought emergency that would give it additional authority to store and release water from private, state and federally owned reservoirs. The commission is due to meet in mid-December to decide whether to take such a step.
One possible course of action would be to ask the U.S. Army Corps of Engineers to release water from an upstate reservoir that is normally only used for flood control, said Clarke Rupert, a spokesman for the DRBC.
A prolonged shortage of rain has reduced flows in the Delaware River – the source of some 60 percent of Philadelphia’s drinking water – allowing the salt front to advance to River Mile 88 near Philadelphia International Airport, its second-highest point since the basin’s “drought of record” in 1963, the DRBC said last week.
The salty water from the Delaware Bay was still 22 miles downstream from drinking water intakes at Torresdale in northeast Philadelphia and across the river at Delran, NJ – both at River Mile 110 — but officials want to keep it as far away from the intakes as possible, and have been releasing water in an attempt to do so.
“Our objective is to make sure we’ve got enough water in storage to repel the salt front,” said DRBC Executive Director Steve Tambini.
But the DRBC’s efforts – as measured by the river’s flow rate at Trenton, NJ — have not stopped the salt front moving three miles upstream since Oct. 20, when it was 13 miles further upstream than is normal for this time of year.
The reservoir releases look like continuing in light of forecasts for no significant rainfall for another 30 days.
“I don’t think we will get a lot of improvement in the basin beyond today’s rain,” said Amy Shallcross, the DRBC’s Manager of Water Resource Operations, said at a public meeting last Wednesday.
Precipitation in the Lower Basin, downstream of Montague, NJ, is now 20-25 percent below normal for the year to date, and the 30-day outlook is “a lot scarier” at 50-75 percent below normal, Shallcross said. State authorities in Pennsylvania and New Jersey  have declared their own drought watches or warnings in many basin counties.
Officials’ ability to maintain the desired volume of water flowing down the river is constrained by a depleted water level in the two Pennsylvania reservoirs. At the Beltzville reservoir, the water level is 68 percent below capacity, and beneath a drought warning line, according to the DRBC.
Joanne Dahme, a spokeswoman for the Philadelphia Water Department, said officials there are watching the salt front, and “taking their cues” from the DRBC on whether to call for voluntary water-conservation measures by city residents.
“It hasn’t gotten above the Ben Franklin Bridge since that really dire drought during the sixties,” Dahme said, referring to the salt front. “We don’t expect that to happen but we are certainly keeping an eye on that salt line on a daily basis.”
Carol Collier, a former executive director at the DRBC, said salty water in the drinking water intakes – should it ever happen – would present a serious challenge for water suppliers like PWD and New Jersey American Water.
“It would be a very severe event to have the salt line reach the Philadelphia and New Jersey intakes,” said Collier, now a senior advisor for watershed management and policy at the Academy of Natural Sciences of Drexel University. “If salinity did get into the system, it would be extremely detrimental.”
Collier, emailing from the COP22 climate conference in Morocco, said it wasn’t possible to blame climate change for any one event such as the current drought but argued that local conditions could be worsened by global trends.
PWD’s Dahme said the City’s forecasts for climate change suggest heavier summer rainfall are likely to be a bigger problem than drought, but that the outlook was uncertain.
“Drought isn’t as high on the prediction list as extreme rain event,” she said. “But one can never say.”

2016 stacking up to be hottest year on record