Ban Ki-moon optimistic Trump will change his mind on climate 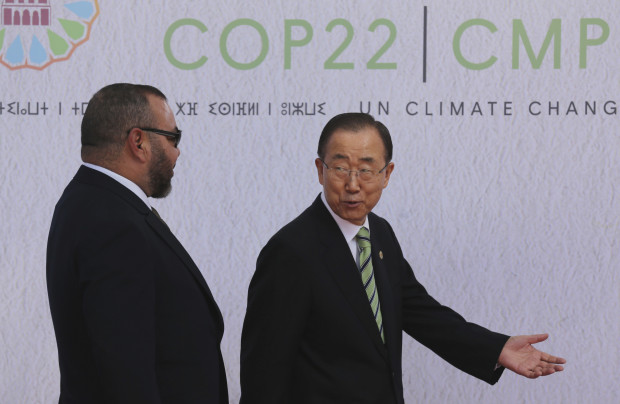 United Nations Secretary-general Ban Ki-moon says he’s optimistic that president-elect Donald Trump can be convinced of the urgency to act on climate change. Ban spoke at a gathering of almost 200 nations assembled in Morrocco to work on reducing global carbon emissions. Trump has said he would withdraw the U.S. from the agreements ironed out in Paris last year aimed at making sure the world does not warm any more than 2° degrees Celsius. He has also called climate change a “hoax.”
Ban Ki-moon said he had spoken to Donald Trump over the phone recently, and he’s sure Trump can be convinced through Reason.
“I believe that he understands that there are market forces already at work on this issue,” said Ban. “And we need to harness these forces for good of the planet and all the species in this planet.”
Ban didn’t give any more details about his conversation with the president-elect. But the outgoing secretary-general said he plans to meet with Trump face-to-face, where he will further emphasize the need for reducing carbon emissions.
“We don’t have a plan B, because we don’t have a planet B,” said Ban. “We have to work very hard, very seriously and very urgently… This is what I’m telling you, not as secretary-general, but as one of the citizens’ of this world.”
Ban said everyone, including political leaders, have a moral mandate to address climate change.
“They’re mandate may be limited, four years, eight years, or ten years but our planet Earth, our world is eternal,” he said. “We have to go on, so we have to address this climate change agreement.”
French President Francois Hollande, addressing the conference, called on Trump to respect the commitments made by the U.S. in Paris last year. Hollande said France would lead a delegation to speak to Trump about climate change.
“The United States, the largest economic power in the world, the second largest greenhouse gas emitter must respect the commitments they have undertaken,” said Hollande. “I assure you France will lead this dialogue with the United States in openness and respect, but with demands and determination.”
Susan Phillips reported from Morocco on a fellowship from the International Reporting Project (IRP).