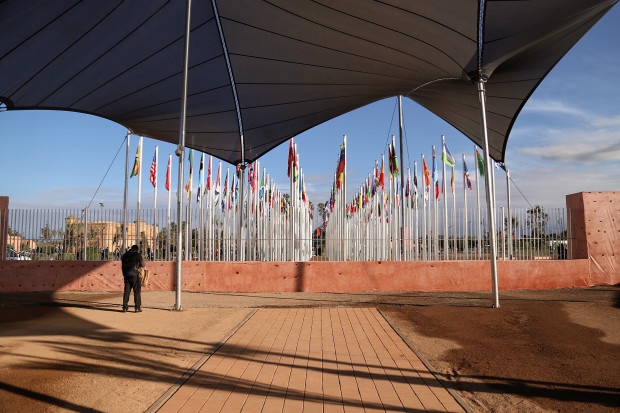 The U.N.’s annual climate conference began just as Republican Donald Trump was elected president. Trump said he would pull the U.S. out of the Paris agreement.

It’s hard to find a corner of the globe where the aftershocks of Donald Trump’s surprise victory in the U.S. presidential election aren’t reverberating. They’re certainly being felt this week in Marrakesh, Morocco, where negotiators from around the world are now gathered for the COP22 United Nations climate conference to hash out the details of the Paris Climate Agreement.
The 2015 accord, which was recently ratified by enough countries to become a binding international agreement, is the latest global effort to cut carbon emissions and stave off the worst impacts of climate change.
The Allegheny Front’s Kara Holsopple spoke to StateImpact Pennsylvania’s Susan Phillips about the post-election mood in Marrakech.

Q: Susan, has president-elect Trump’s win cast a shadow on what’s happening there because he’s said he won’t honor the Paris agreement that the U.S. signed?

A: Absolutely Kara, there’s shock and trepidation about what’s going to happen to this global climate agreement and what role the U.S. will play. Remember—this is the first U.N. climate talks where there was an actual agreement. One hundred countries signed onto this and it was ratified before anyone expected it to be, so there was a lot of optimism here. Now, a lot of folks are trying to put a positive spin on this by saying the business environment is going toward investment in renewables. If you look at the fact that coal is still a lot more expensive than natural gas and that has nothing to do with anything being negotiated at this climate change conference, that’s the result of the global situation with shale gas being so cheap. So they’re hoping that despite Trump’s reluctance to even say human-caused climate change exists, they’re still hopeful they can push for a new energy future that has less fossil fuel and more renewables.

Q: Can the U.S. back out of the Paris agreement now?

A: Officially, it would take them four years. There’s nothing really in the agreement to hold them to their pledges anyway, so Trump could easily ignore whatever Obama pledged. And he could also appoint a Supreme Court justice who could overturn the Clean Power Plan.

Q: Well what does this all mean for further negotiations?

A: The question I had when I woke up this morning was here I am in Marrakech covering these climate talks but what do the folks do who are negotiating for the U.S., what do they do, right now they have a mandate from President Obama, but ninety days from now they will have a very different mandate. And one of the things they were trying to iron out at this climate conference at this COP is finances. How would developed nations support financially the less developed nations when it comes to preparing for the impacts of climate change as well as reducing carbon emissions. That could cost trillions of dollars and of course the U.S. would be one of those contributors. So a lot of these least-developed countries are very concerned about what happened in the election.

Q: What do the climate talks mean for people in Pennsylvania?

A: “Pennsylvania is an interesting case, because you have this historical coal industry that’s been hurting, as natural gas development increases. And even Hillary Clinton said that natural gas should be a bridge fuel to renewables, so it’s not as if she was strongly anti-fracking. But I think before this election, I could pretty clearly tell you that coal production would decrease and natural gas production would increase—and possibly, renewable subsidies would increase. But now, that’s all more questionable.”

Susan Phillips reported from Morocco on a fellowship from the International Reporting Project (IRP).

Future of PES refinery could be decided Friday behind closed doors