Banning fracking at rigs like this one in Pennsylvania's Tioga State Forest would cost jobs and raise prices at state and national levels, a US Chamber of Commerce report said.

Any federal ban on fracking for oil and natural gas would cause fuel prices to surge, leading to job losses, higher electricity and gasoline costs and an increased cost of living, especially in top gas-producing states like Pennsylvania, the U.S. Chamber of Commerce said in a report issued on Friday.
Four days before the presidential election, the Chamber’s report focused on oil and gas production in the important swing states of Pennsylvania and Ohio, and warned that a nationwide ban on fracking, as proposed by some environmental groups, would produce significant economic damage in both states.
It estimated that Pennsylvania would lose 466,000 jobs over the next five years; that the cost of living for the state’s households would rise by an average of $3,500 a year, and that state gross domestic product would drop by $45 billion by 2022 if fracking was banned by an incoming president.
“A fracking ban would be a disaster for the U.S. economy, exceeding the economic harm caused by the financial crisis, the housing bust, and the Great Recession, combined,” the report said.
It did not explicitly accuse Democratic presidential candidate Hillary Clinton of proposing a ban on fracking but prominently quoted her as saying in a March 2016 speech that: “By the time we get through all of my conditions, I do not think there will be many places in America where fracking will continue to take place.”
Hillary Clinton has never called for a fracking ban, and while serving as secretary of state under President Obama, she helped encourage fracking abroad. Her campaign website says she would impose additional safeguards on natural gas production to curb hazards like water contamination and methane emissions, but does not propose a ban on fracking, which differentiated her from her Democratic primary rival Bernie Sanders. Sanders supporters tried to get the Democratic party to adopt a fracking ban but failed. The Clinton campaign did not immediately return a call for comment.
Republican candidate Donald Trump says repeatedly he would “unleash” untapped reserves of oil and natural gas, as well as revive the coal industry.
Christopher Guith, Senior Vice President of Policy at the Chamber’s Institute for 21st Century Energy, denied that the report aimed to get involved in presidential politics.
“Our goal is not to try to influence the presidential election,” Guith said during a conference call with reporters.
Instead, he said the Chamber is “taking candidates and their supporters at their word that they want to ban fracking” and so believes that it is necessary to explain the impact of that policy nationally and on a state-by-state level. The report also looked at the effects of a fracking ban in Colorado and Texas, both top energy-producing states.
“Frankly, there has been too little analysis on any of these proposals throughout the course of the campaign from within the media or outside the media, and we felt it incumbent to inform Americans,” Guith said.
Two neighboring states, New York and Maryland, currently have a fracking ban. An attempt to ban fracking in Colorado failed this year. And local fracking bans in places like Texas have been overturned by the courts. 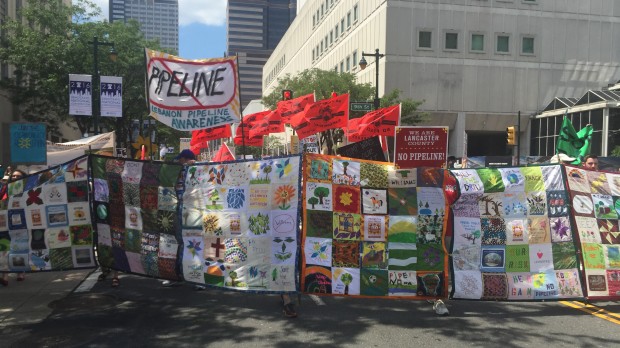 Thousands marched for clean energy and against fracking ahead of the Democratic National Convention in Philadelphia this summer.

Gene Barr, president of the Pennsylvania Chamber of Business and Industry, said the Chamber had released the report shortly before voters go to the polls in an effort to improve public understanding of the candidates’ positions on fracking.
“If we could do this on Monday, I would be happy to do it on Monday,” Barr told reporters. “I can’t think of a more important thing to do to bring critical issues like this to the forefront, particularly at a time when we’ve seen a presidential campaign that in many cases has been so devoid of substantive discussion on issues.”

Garbage in garbage out

Stephen Herzenberg, an economist with Keystone Research Center, a left-leaning think tank, said the Chamber’s estimates of economic damage from a fracking ban are unrealistically high, and reflect a history of lobbying on behalf of the energy industry.
“This model is a case of garbage in, garbage out,” he said. “The U.S. Chamber, the Pennsylvania Chamber, the Marcellus Shale Coalition, have a long history of generating ridiculous estimates about the actual or potential job impact of fracking. This is just one more in a long series of such estimates.”
Herzenberg said that some 90 percent of the Chamber’s projected job loss comes from the higher gas prices that would result from a fracking ban, but that the estimate is far too high. “On its face, these are laughable numbers,” he said.
Campaigners who call for a ban on fracking on the grounds of its effects on the environment and human health argued that the report’s timing appeared to be an attempt to influence voters.
“It can’t possibly be a coincidence,” said Karen Feridun, a co-founder of Pennsylvanians Against Fracking. “There has been a lot of talk about fracking in this election cycle. It really did make it on to the national stage in a way that it has never made it on to the national stage in a previous election. It’s no surprise to me that they should be talking about it favorably so close to the election.”
Feridun said the report was likely influenced by the importance of Pennsylvania and Ohio as swing states, and by the industry’s recent downturn as a result of lower natural gas prices.
“Some of it is cheerleading to make the state feel a little bit better, and some of it is tied to the election,” she said.
Feridun said past claims of economic gains as a result of fossil fuel development have been overstated, and that any loss of jobs from a ban on fracking could be offset by investment in renewable fuels and energy efficiency by both the public and private sectors.
In contrast to the chamber’s suggestion that a Clinton administration would roll back fracking, Feridun called Clinton’s position on the issue “terrible”, and said there was no indication that the candidate, if elected, would stop the practice in Pennsylvania or anywhere else. “They are not against it,” she said.
Natural gas production rose eight-fold from 2010 to 2015 as the Marcellus Shale was developed, making Pennsylvania the second-biggest gas-producing state in the country, while estimates of the state’s proven natural gas reserves quadrupled from 2010 to 2014, the report said.
The abundance and availability of natural gas has driven down energy costs and created jobs over the last decade but those gains would be threatened by any ban on fracking, it said.
“The commonwealth’s positive economic progress, driven in large part by increased hydrocarbon production and the broad-based associated benefits, cannot continue under a scenario in which fracturing technology is banned,” the report said.
Emily Wurth, Water Program Director at Food & Water Watch, an anti-fracking group that chamber officials called “misguided”, said states like Pennsylvania should be investing in renewable energy rather than fossil fuels like natural gas.
“There’s huge economic opportunity in rebuilding our economy around renewable energy and energy efficiency which creates jobs,” Wurth said.

This story has been corrected to describe Keystone Research Center as a left-leaning think tank, not as a non-partisan organization.