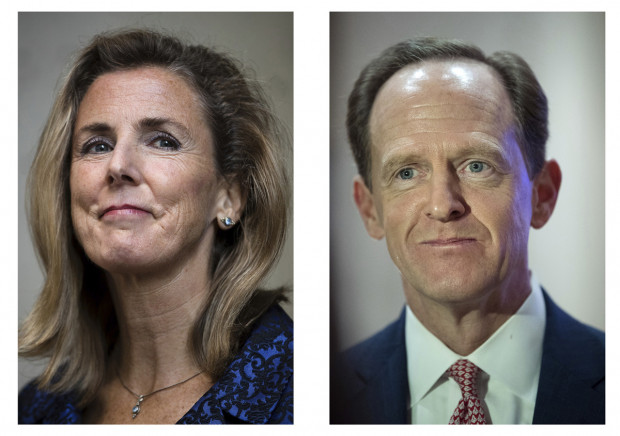 When it comes to Beltway politics, all eyes are on the Pennsylvania Senate race. The tight contest between incumbent Republican Pat Toomey and his Democratic challenger Katie McGinty could help decide which party controls the Senate. Millions of dollars are flowing in from outside groups, including those aligned with fossil fuel interests, and those supporting national environmental groups. The millions in dollars from big oil and big green flowing into this race reflects how the two candidates have starkly different views on energy, environment and climate change.
In the debate over the nation’s energy future, a lot rides on which party controls the U.S. Senate. So even if these are not the top issues for Pennsylvania voters, you can bet they are for the fossil fuel industry worried about new environmental regulations like the Clean Power Plan, as well as environmentalists racing to put a halt to a warming planet. On the airwaves and in mailboxes across the state, it’s as if two sides are waging a proxy war over energy and the environment in the Pennsylvania senate race.


The Center for Responsive Politics, which tracks campaign funds reported to the Federal Election Commission, recorded about $3.6 million dollars spent by green groups like the League of Conservation Voters, NextGen Climate, Environment America Action Fund, and Environmental Defense Action Fund to help elect Katie Mcginty. The New American Jobs Fund, a super PAC formed by the League of Conservation Voters and the U.S. Steelworkers labor union, spent about $1 million in support of McGinty. In terms of donations from individuals working for environmental protection, as well as environmental PACS, McGinty’s campaign has raised $257,930.
For large national environmental groups, backing McGinty is a no-brainer. She was a protégé of Al Gore, she served as Pennsylvania’s environmental protection secretary under former Gov. Ed Rendell, and she is committed to fighting climate change. Toomey, on the other hand, while not denying climate change exists, has questioned whether humans are the primary cause. Toomey is an advocate of smaller government, which means fewer regulations across the board for energy production and fewer rules for environmental protection. A supporter of the coal industry, along with oil and gas, Toomey opposes the Clean Power Plan, Obama’s landmark proposal to make electricity cleaner and reduce greenhouse gas causing carbon emissions.
The Center for Responsive Politics also reports that Freedom Partners Action Fund, a super PAC associated with the Koch Brothers, whose family fortune came from oil refining, has spent $7.2 million to help elect Pat Toomey. Koch Industries has expanded its reach beyond oil refineries, and now manufactures a whole host of products. Freedom Partners backs a number of conservative causes in addition to fossil fuel production. On its website it says the super PAC supports more fossil fuel development, and less regulation:

Instead of acting as a roadblock, the federal government must pass laws that remove impediments to further unleashing this incredible resource for growth. Politicians should let the private marketplace—including businesses and consumers—determine which energy sources succeed. 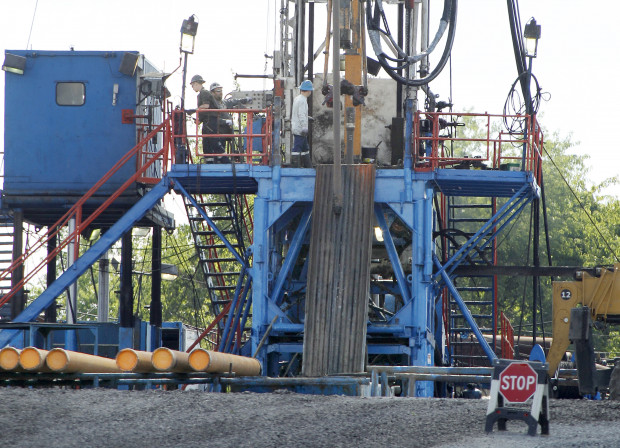 A crew works on a drilling rig in Zelienople, Pa. file photo

The U.S. Chamber of Commerce has invested $5.1 million to support Pat Toomey, including a television commercial that attacks McGinty’s support for a carbon tax, cap and trade, and a natural gas severance tax for Pennsylvania. The group does not disclose its donors, but the Center for Responsive Politics reports that both Freedom Partners and the American Petroleum Institute has given money.
When it comes to individuals and PACS associated with the oil and gas industry, Toomey ranks in the top ten Congressional recipients with $287,338 in donations during the 2015/2016 election cycle. He told the Pennsylvania Press Club last month that the Clean Power Plan would kill the coal industry.
“The EPA is determined to end the coal industry,” he said. “Hillary Clinton is a cheerleader for that, so is Katie McGinty, by the way, natural gas is next.”
It’s unlikely McGinty will attempt to eliminate natural gas production. She doesn’t support a fracking ban, but she says it should be regulated, and more importantly, she served on the board of NRG – an energy company with natural gas interests. 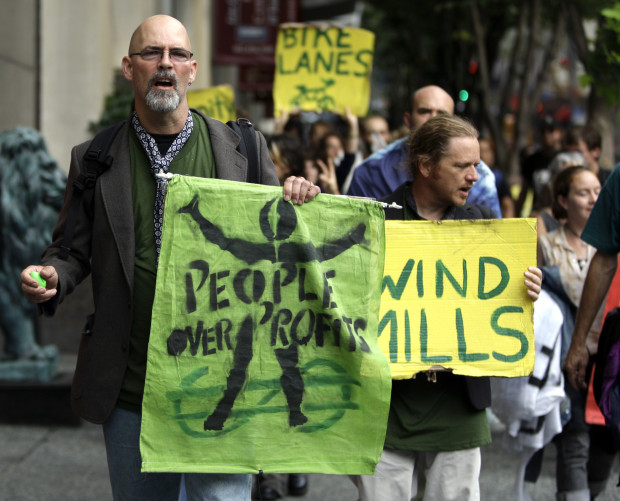 McGinty did promote renewable energy development under former Governor Ed Rendell. She told the Pennsylvania Press Club back in August that she’s not against coal, but she spent more time talking about incentives for solar and wind.
“I would lead the charge to make sure we have those incentives in place and we can get back to those good manufacturing jobs and those good clean energy jobs that we were proud to have when I was serving as secretary of environmental protection,” she said.
McGinty’s career in the energy industry is actually a line of attack by Toomey. After leaving her position as the head of the Department of Environmental Protection, McGinty served on the boards of several energy companies, including NRG, as well as green energy companies Iberdrola USA, and Thar Energy.
Apart from the outside groups buying ads and mailings to influence the race, there’s also a clear pattern in direct industry contributions to the candidates’ own campaign committees. From the energy and natural resources sector overall, which along with oil and gas interests, includes pipelines, mining, alternative energy, electric utilities and waste management, CRP reports Toomey raised about $1 million compared to McGinty’s $177,375.