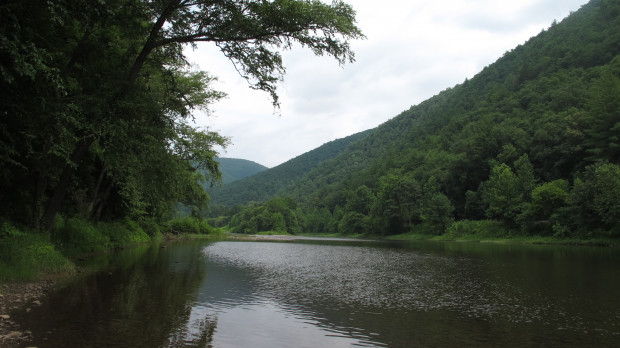 A view of the Pine Creek in Lycoming County.

A state Senate committee approved a resolution Tuesday calling for an analysis of Pennsylvania’s environmental laws and regulations, to ascertain which ones are more stringent than federal rules.
Proponents say it helps streamline government and encourage economic growth, while environmental groups argue it’s designed to roll back standards that protect public health.
Sen. Michele Brooks (R- Crawford) is the prime sponsor. She was not available to comment Wednesday, but in a memo to fellow lawmakers, says the resolution will give Pennsylvania a more competitive business climate.
“While most certainly all of us understand the importance of our environment, this resolution is intended to find balance through practical application of the laws and regulations and at the same time permit economic growth and job creation,” Brooks wrote. “Hopefully, this can be a first step in pinpointing current laws and regulations that impact hardworking citizens and businesses.”
Joanne Kilgour heads the Pennsylvania chapter of the Sierra Club and says while the resolution appears innocuous, she remains concerned.
“Even though the resolution claims to only be about taking inventory, the obvious motivation is to try to move forward with Pennsylvania having the least restrictive regulations,” says Kilgour. “That’s the last thing we should be doing, as one of the top-polluting states in the country.”
The commission doing the analysis would be required to produce a report with recommendations to the General Assembly within 18 months after the resolution is adopted. The Senate was not scheduled to vote it Wednesday, but could take it up when lawmakers return October 17th.