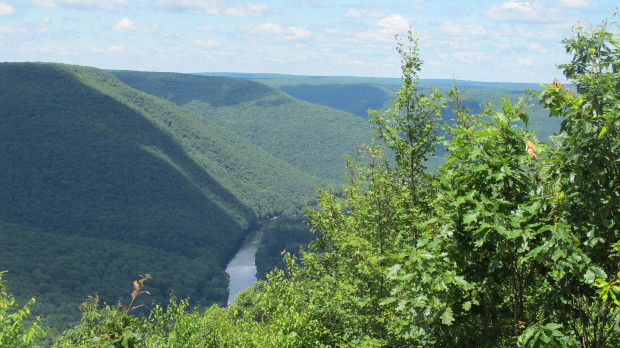 The state Department of Conservation and Natural Resources has released an updated plan outlining its priorities for managing Pennsylvania’s 2.2 million acres of public forest land. It’s the the first time DCNR has updated the plan in nine years.
“It’s a good road map for us to use over the next several years,” says State Forester Dan Devlin. “It’s a guidance document for our own staff, but it also informs everybody else how we intend to manage the state forest system.”
He says the Marcellus Shale boom has been one of the biggest changes the department has seen during the past decade. The department has issued a new position statement on oil and gas development, which includes a commitment to protect public parks “to the greatest extent possible.”
Shortly after taking office, Governor Tom Wolf issued an executive order prohibiting new oil and gas leases on state park and forest land. Close to half of all state forest land is already available for oil and gas development, either because the state doesn’t own the mineral rights, or it has previously leased the publicly-owned mineral rights.
Drilling on public forest land has been controversial. Nearly all the Marcellus Shale leasing took place under former Governor Ed Rendell, a Democrat, before he issued a moratorium on the practice. His successor, Republican Tom Corbett, also sought to expand leases as a way to raise revenue.
Due to the overall slowdown in drilling, there aren’t any rigs operating in the state forest system right now, says Devlin. But DCNR continues to manage the existing infrastructure.  DCNR is also in the process of updating its Shale Gas Monitoring Report, which tracks how gas development is impacting the forest. Devlin expects that to be finalized by the end of 2017.