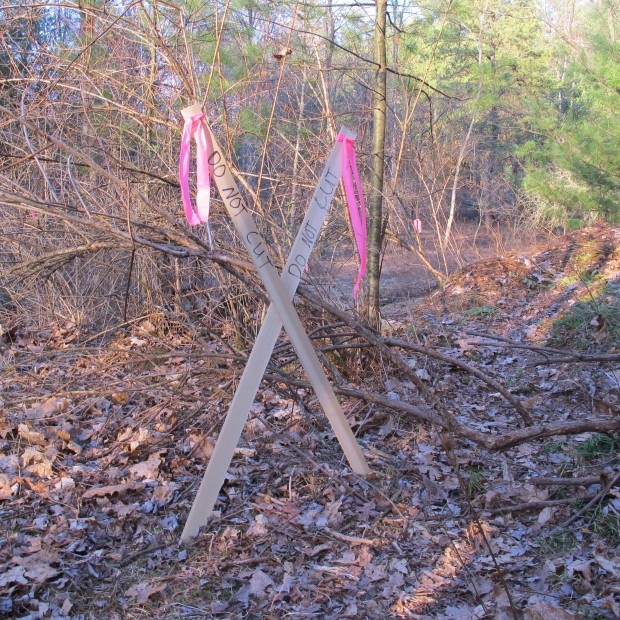 Sticks mark a section of forest where an independent consultant hired by the property owners in Huntingdon County surveyed land before tree clearing for the Mariner East pipeline. Landowners and environmentalists say Sunoco has submitted incomplete permits for stream crossings and erosion control, including permits that leave out known streams and water crossings.

As landowners battle Sunoco Logistics in court over eminent domain takings, critics are pushing back against the pipeline on another front — permits the project needs from the state to move forward with construction. Sunoco has already begun felling trees along the 300-mile long proposed pipeline route through Pennsylvania, but the company can’t lay any pipe without erosion and sedimentation control permits from the Department of Environmental Protection. It also can’t cross any waterways without the water crossing permits.
The deadline for public comment period on the Chapter 105 permits, which regulate stream and wetlands crossings, has already passed. The deadline for public comment on the erosion and sediment control permits, known as Chapter 102, is Tuesday. Residents at recent public hearings on the pipeline project have complained that DEP went ahead with the public comment periods without having received completed permit applications from Sunoco.
“That’s what makes this different,” said Alex Bomstein, an attorney with the Clean Air Council, which along with several environmental and landowner organizations, submitted a 34-page detailed comment letter outlining the deficiencies in Sunoco’s permit applications for stream and wetland crossings.
Neil Shader, a spokesman for DEP told StateImpact that all the permits are “administratively complete” and are now under technical review. Shader says letters will soon be going out to Sunoco detailing the deficiencies in their permits.
But Bomstein, with the Clean Air Council, says Sunoco’s permits were so full of holes, he couldn’t even list all the deficiencies in the organization’s public comments.
“It’s not unusual for companies to submit incomplete applications,” said Bomstein. “It’s unusual in the degree to which these applications are incomplete.”
Bomstein says a consultant hired to review the applications for private landowners found a number of streams and wetlands not even listed on Sunoco’s permit applications. Municipalities have pointed out inaccurate maps. Penn Township, Westmoreland County reported to DEP that the maps sent to them by Sunoco were outdated, and where the company wanted to build an access road, now stands an office building.
A report submitted by the Delaware County Conservation District stated that the manager was unable to conduct a complete review. District Manager Edward Magargee detailed about two dozen issues with the permits, including questions on how potential damage to water crossings would be mitigated, and how arsenic contamination would be contained at the point where the pipeline would run through Linvilla Orchard. Magargee told StateImpact that it’s not unusual for permits to be incomplete.
“Very few plans get through on the first review,” he said.
Municipalities are required to check the erosion and sediment control plans for such projects against their own stormwater and floodplain plans, in accordance with Pennsylvania’s Stormwater Management Act, also known as Act 167. Bomstein says his own review found about 42 percent of municipalities found the permits consistent with their stormwater management plans, and about 54 percent determined it was consistent with floodplain plans. The others responded that the applications were too insufficient to make a determination. Some reported back to DEP that the permits did not comply with their stormwater or floodplain plans.
A spokesman for Sunoco Logistics says the company’s permit applications, along with the required Act 167 consistency letters are complete.
“Sunoco Pipeline’s applications went through a rigorous review by DEP, and they were found to be complete and were accepted for technical review,” wrote Sunoco spokesman Jeff Shields in an email. “We are now moving forward through that process, and the comments received back from the counties and/or municipalities are part of that process.”
DEP says in order for the permits to be considered “administratively complete,” the stormwater and floodplain reviews from the municipalities do not have to be consistent with Sunoco’s erosion and sediment control permit applications.
This doesn’t sit well with Delaware County resident Eric Friedman, president of the Andover Homeowner’s Association, which includes land along the proposed pipeline route.
“Obviously if the applications were judged on their merits they would fail,” said Friedman in an email. “So apparently PADEP intends to let the applicant continue to patch up its applications after the declared public comment period is over. How can the public comment on what it hasn’t seen?”