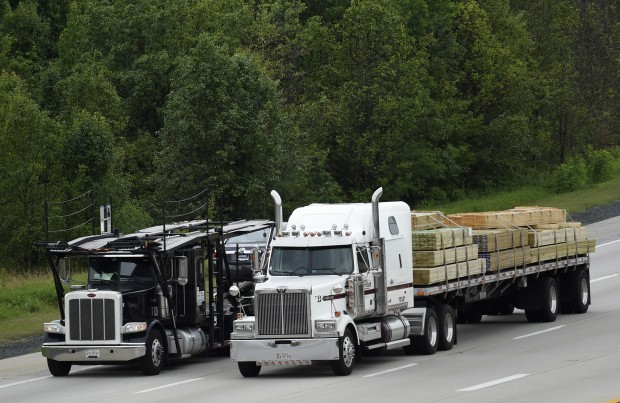 Trucks head eastbound on Rt 50 in Bowie, Md. The Obama administration on Tuesday unveiled tougher mileage standards for medium and heavy-duty trucks, the latest move by President Barack Obama in his second-term drive to reduce pollution blamed for global warming.

As part of its final push to combat climate change, the Obama administration has unveiled tough, new fuel efficiency rules for heavy duty vehicles.  The new standards will force manufacturers to reduce carbon emissions from big-rigs, tractors, garbage trucks and buses.
Speaking to reporters about the move, EPA Administrator Gina McCarthy said there’s a lot at stake.
“2016 is on pace to be the hottest year ever recorded by a significant margin,” McCarthy said. “Average temperatures and sea levels keep rising, coastal flooding is getting worse and arctic sea ice is melting at alarming rates.”
And  more and more big trucks are barreling down the highway carrying everything from new cars to refridgerators to new clothes ordered online, making trucks the fastest growing source of transportation greenhouse gas emissions.
“Our public health, our economic well being, and our children’s and grandchildren’s future is at stake in this climate fight,” McCarthy said.
The EPA says heavy duty vehicles account for 20 percent of greenhouse gas emissions from the transportation sector.
Environmentalists praised the move. Phyllis Cuttino is director of the Clean Energy Initiative at the Pew Charitable Trusts.
“I think it’s a win for industry because it’s going to save industry money,” she said. “And it’s a win for consumers because costs will increase at a slower pace. And it’s a win for the environment because you’re reducing pollution.”
Cuttino says trucks transport about 70 percent of manufactured goods in the U.S. annually.
“Those are among the least efficient vehicles on the road and some average about six miles a gallon, and they travel the most. They travel about 120,000 miles a year,” said Cuttino.
Industry has been largely supportive. Glen Kedzie is with the American Trucking Associations, which spent three years working with the EPA and the Department of Transportation on these new rules.
“We’re hopeful that things will work out,” he said, “that there will be a return on our investment within the period of time that they state. That the technologies won’t create any maintenance issues that we didn’t foresee.”
Kedzie said manufacturers will have ten years to comply with the rules. The emission standards will apply to vehicle model years from 2019 through 2027. Consumer advocates also support the new standards. The Consumer Federation of America estimates that the average American family spends $1,100 a year on shipping costs that are passed on to consumers.