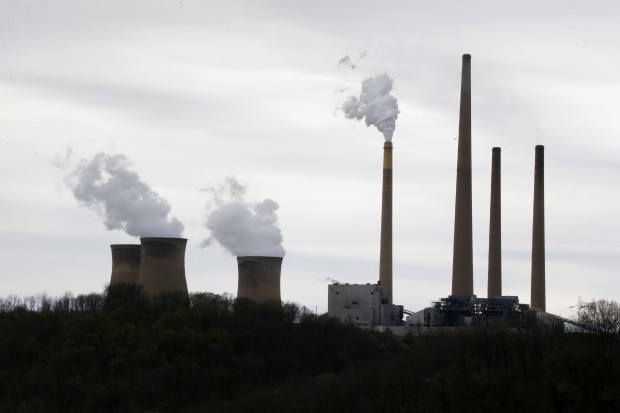 Emissions from power plants like this in Homer City, PA will be regulated under the Clean Power Plan when it emerges from its Supreme Court review, an adviser to Hillary Clinton's presidential campaign said.

A future Clinton administration would assume that the U.S. Supreme Court is going to uphold both the Clean Power Plan and the Environmental Protection Agency’s responsibility to regulate greenhouse gases under the Clean Air Act, Hillary Clinton’s energy adviser said on Wednesday.
Trevor Houser also said that if the Democratic nominee becomes president, her administration will work to provide new economic opportunities to coal miners who have been displaced by the move away from coal in the nation’s energy mix.
During a panel discussion hosted by the media organization Politico during the week of the Democratic National Convention, Houser said the Clinton campaign is optimistic that the CPP will survive its current stay, as ordered by the Supreme Court, and that the EPA will continue to regulate carbon emissions despite current legal challenges.

“We are optimistic that that’s going to be upheld,” Houser said, referring to the CPP, which would make big cuts in carbon emissions from existing power plants. “And it’s pretty unequivocal from the Supreme Court that EPA needs to regulate greenhouse gas emissions under the Clean Air Act.”
Another panelist, former Obama energy adviser Heather Zichal, urged a new administration to build public confidence in the fracking industry, which she said has concealed its operations from the public and has too often fought regulation in the courts.
“There is a very serious lack of trust from the American people when it comes to the safety of fracking,” Zichal said. “Right out of the box, industry fought against public disclosure requirements.”
Most of the oil and gas industry is willing to comply with regulation on controversial areas such as waste water management and well integrity but there is a “very vocal contingent” that is fighting the regulations in the courts, she said.
She urged those sections of the industry to back away from their adversarial stance and seek a more cooperative approach to regulation.
“There’s an opportunity for the industry to say, ‘We accept this is not a zero-risk proposition but here are the things that we’re doing to manage those risks,’” Zichal said.
She urged a new administration to allow the industry to “step out and lead a little bit rather than starting from a position where they are just being in an attack mode against regulation.”
In another preview of possible energy policy under a new Clinton administration, Houser said it would promote renewable energy, which he predicted would eventually be embraced by the Republican Party when it accepts that renewables are a rich source of jobs.
Wind turbines, for example, are mostly sited in rural counties, where they are a critical source of revenue for landowners and farmers, Houser said.
In North Carolina, fourth-generation tobacco farmers are using solar-installation tax revenue to maintain family farms, and they get five times more per acre than they do at current tobacco prices, he said.
“As people start to see the economic benefits that come from clean energy, that will start percolating back through the Republican Party,” Houser said. “It may be a generational exercise but I am confident that the party of Teddy Roosevelt, and the party that authored the Clean Air Act, can find its way back.”
Houser, a native of coal-dependent Wyoming, said the industry has been hit hard nationally by the growing switch to natural gas, renewables and other forms of energy for power generation and commercial and residential uses.
In apparent appeal to white working-class voters who are backing Republican nominee Donald Trump, Houser said a new Clinton administration would create new opportunities for miners who have been left jobless by falling demand for coal.
“I think it’s important for us to realize how tough the transition we are going through here is for coal communities,” he said. “This is something that Secretary Clinton cares very passionately about, and why she has released a pretty comprehensive plan for providing a more diversified and resilient economic future.”
Wyoming’s economic troubles show the dangers of a state depending too heavily on a single industry, Houser said.
“Wyoming used to have some of the best elementary schools in the country, and now we have a double-digit billion dollar hole in the state budget, and a lot of it is because state politics have been captive to a single industry for a long time,” he said.
A policy of economic diversification would help other coal-mining areas such as West Virginia, Kentucky and southeast Ohio, which have also been hit by a slump in exports of metallurgical coal to China, he said.
“We need a serious strategy for economic diversification in those communities that have been the engine of our economy in the past century and we need to ensure that they are the engine of our economy in the century to come,” Houser said.

Energy and climate change discussions at the DNC