Demonstrators urge PES to rethink its plans for expansion at Southport 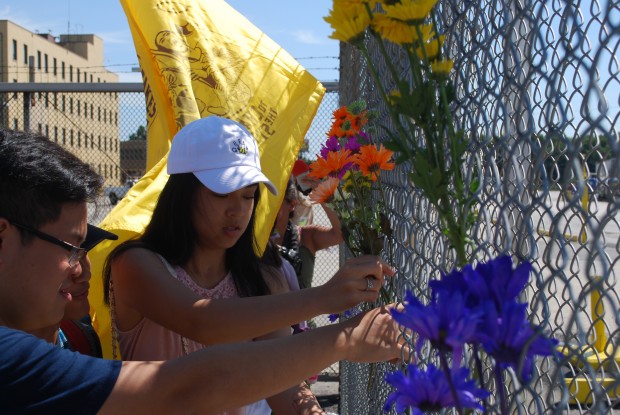 Environmentalists and community activists fixed flowers to the perimeter fence at Philadelphia Energy Solutions during a demonstration calling on the refiner to rethink its plans to expand at the proposed Southport marine terminal.

Environmentalists and community activists called on Philadelphia Energy Solutions on Tuesday to withdraw a proposal to build a new facility at the planned Southport marine terminal, saying the project would worsen local air pollution and increase the region’s dependence on fossil fuels.
Around 100 protesters gathered outside the PES refinery in South Philadelphia, and said they hoped to influence the policies adopted by the Democratic National Convention taking place at the Wells Fargo Center a few miles away.
The demonstrators, carrying yellow flags and banging drums, briefly blocked traffic on busy Passyunk Avenue, angering drivers and causing backups in both directions. They also stopped tanker drivers going in and out of the refinery, prompting a confrontation between several protestors and at least two of the drivers.
Members of groups including ACTION United, which campaigns for environmental justice and other causes, and Philly Thrive, which opposes the creation of an “energy hub” in Philadelphia, fixed flowers to the refinery’s chain-link fence, and occupied its driveway for about 10 minutes as a handful of police looked on. 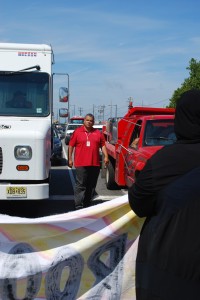 Robert Haut, a tanker driver who was prevented by the protesters from leaving the refinery, said he understood their concerns but said they should not have been blocking the gate.
“I think it’s an inconvenience to all of us working here,” he told StateImpact, as another driver blew his horn in an attempt to clear a path through the demonstrators. “I agree with the topic but the way they are going about it is wrong because they are stopping working men from working.”
Demonstrators said they wanted to signal their opposition to PES plans for Southport, which would build import and export facilities for crude oil and petroleum products.
“There’s this proposal to expand this refinery,” said Kia Hinton, an organizer with ACTION United. “It harms our neighborhood and we don’t think that’s right. These are vulnerable communities.”
Hinton said that concerns about the refinery’s proposed Southport expansion are part of opposition to the energy hub, a planned complex of petroleum processing, transmission and storage facilities that has been proposed by PES Chief Executive Phil Rinaldi as an economic boon for the region, and an outlet for Pennsylvania’s rich natural gas resources. The energy hub is decried by environmentalists as an untimely boost for fossil fuels.
“We should be looking at ways in which we can create jobs that are healthy for our community members, and so we would like to see some kind of container port, something that is not going to make people sick,” Hinton said.
Cherise Corley, a spokeswoman for PES, declined to comment on Tuesday’s event or the claims made by demonstrators.
The event was linked to the DNC by appealing to Pennsylvania Gov. Tom Wolf, co-chair of the event, who has declined several invitations to attend community meetings on air-quality concerns, said Arielle Klagsbrun, another member of ACTION United.
Anticipating his absence at Tuesday’s event, the organizers arranged for a cardboard cutout of the governor to be present. Also present was a giant effigy of Berta Caceres, a Honduran environmental activist who was shot dead in March of this year.

Demonstrators called for Philadelphia Energy Solutions to Scrap its plans to expand at Southport.

Wolf’s spokesman, Jeff Sheridan, said he was unaware of any invitations for the Governor to attend community meetings but said he is always willing to hear from members of the public about their concerns.
Opponents of the PES plans to expand at Southport, on the eastern end of the Philadelphia Navy Yard, hope to influence the Governor because he controls a majority of the board of the Philadelphia Regional Port Authority, which is expected to decide by the end of the year whether PES or one of five other bidders will win the right to develop the 194-acre site.
Sheridan said the governor makes seven appointments to the PRPA’s 11-member board, four of his own, and one each on the basis of recommendations from the Mayor of Philadelphia, the Delaware County Council, and the Bucks County Board of Commissioners.
But he said the current evaluation of requests for proposals are not controlled by the Governor. “The RFP is a competitive process controlled by PRPA, independent from the governor,” Sheridan said.
Greg Iannarelli, chief counsel for PRPA, said PES is bidding to develop both parts of the Southport site, which will be the first major marine terminal expansion at the Port of Philadelphia for 40 years, according to the PRPA. Bids are due by August 31 on Site 1 and by Sept. 1 on Site 2, he said.