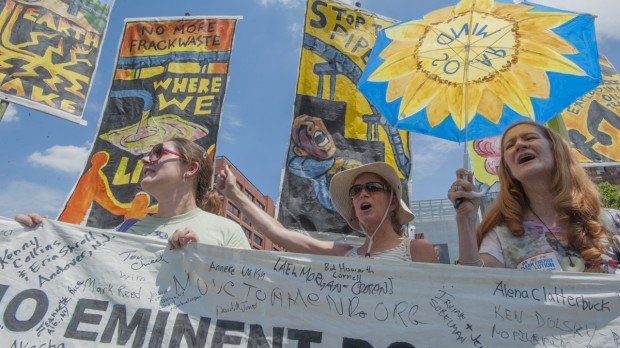 Opponents of the Algonquin Pipeline cheer speakers at a rally after the clean energy march in Philadelphia Sunday afternoon.

Thousands of campaigners for clean energy marched through the center of Philadelphia on the eve of the Democratic National Convention on Sunday, urging the party to adopt policies that would ban fracking and promote the use of renewable energy.
In an event that mixed national politics with local opposition to specific energy projects, some demonstrators called on the Democratic presidential nominee, Hillary Clinton, to step up her support for renewable energy, while others – many of them backers of Clinton’s former rival, Senator Bernie Sanders — vowed never to support Clinton even if that increased the chances of the Republican nominee, Donald Trump, becoming president.


Carrying signs such as “NeverHillary – Bernie or Bust” and “Fracking is Not a Bridge – Are You Listening Hillary?” demonstrators marched from City Hall down Market Street to Independence Mall on a sweltering day, in a peaceful but noisy event that called on state and national authorities to ban fracking and associated activities including pipelines and oil trains.
Americans Against Fracking, an advocacy group that organized the “March for a Clean Energy Revolution” said more than 10,000 representatives of some 900 groups from 50 states attended the event. Police estimated the number at around 2,000. 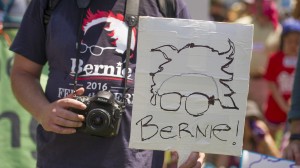 “I would hope that the Bernie Sanders campaign has had a crowd effect on her policies,” said Mitch Aulberg, 53, a software engineer from Tinton Falls, NJ, who carried a “Fracking is Not a Bridge” sign. “She has always been pretty pro-fracking, using natural gas as a bridge, and we’re saying you don’t need a bridge. You need to dig in and make clean energy a reality.”
Aulberg said he supported Sanders in the primary and was not optimistic that Clinton would increase her advocacy for clean energy but would vote for her in the general election rather than risk a Trump presidency. “If you look at her policies overall, I think you’ve got to stick with Hillary,” he said.
But Gwen Sperling, 56, a social worker from Santa Fe, NM, said she would not vote for Clinton under any circumstances because of her disappointment with the policies of the Democratic Party.
“I’ve had enough of the Democratic Party and their half measures,” said Sperling, who wore a black Bernie Sanders T-shirt. “I will not vote for Hillary. Trump can be the president as far as I’m concerned.”
In the last presidential election, the third party presidential candidates like Green Party candidate Jill Stein got less than half of one percent of the vote. But this year, the Green Party’s Stein along with the Libertarian Party presidential candidate Gary Johnson are polling surprisingly well, at least compared to previous elections. Recent four-way surveys with Trump, Clinton and the two third-party candidates have Johnson at double digits while Green Party’s Jill Stein polled at five or six percent, something that has been unheard of in previous Presidential elections. It certainly surprised Stein. 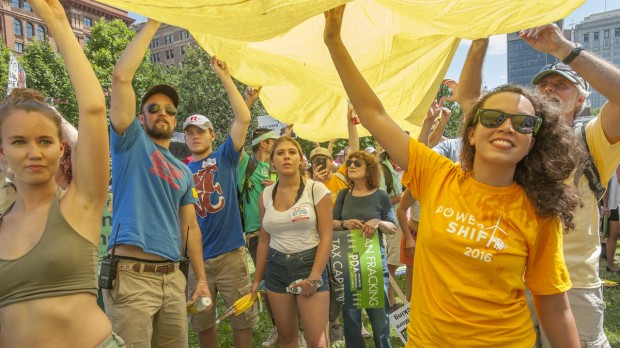 Protesters unfurl a cloth sun at the conclusion of the rally on Independence Plaza.

“You know my campaign has gone from two percent up to six and seven percent in the polls over the course of the past six weeks without really any attention,” Stein said.
Sanders supporters were hoping for a ban on fracking but were disappointed when the Democratic platform committee rejected that position. Although Bernie Sander’s backers on the platform committee in Orlando, Florida did manage to get the party to support a price on carbon and to prioritize renewable energy over natural gas.
Sander’s surrogate and anti-fracking activist and filmmaker Josh Fox was on the platform committee and said he was surprised they got anything from the Clinton campaign.
“I didn’t know this was going to happen, I really didn’t know this was going to happen,” Fox told StateImpact. “I think the Clinton folks knew that there was a very loud and proud anti-fracking movement that not only could disrupt Orlando, but could also disrupt Philadelphia.”
Fox says he still doesn’t know who he is going to vote for in November, but he worries that Green Party candidate Jill Stein could take votes away from Hillary Clinton. He realizes that the party platform may not mean much when it comes to actual governing. But Fox says there’s still a big difference between Clinton and Trump on climate change.
“If Hillary Clinton is president we’re going to have to fight her on our agenda,” he said. “If Donald Trump is the president we’re definitely fighting him on our agenda. The question comes down to me often, who would you rather fight?” 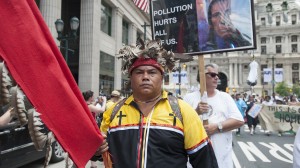 Chief Vincent Mann of the Turtle Clan, part of the Ramapough Lenape Indian Nation leads a contingent of Native Americans opposed to pipelines crossing their land.

The clean energy march was lively with Sanders supporters, but it was hard to find anyone who had much excitement for Clinton.
Some protestors linked their opposition to local projects like natural gas pipelines to a global need to reduce carbon emissions, and said a Democratic president would be in a position to address both issues.
“We are trying to call attention on the political agenda to pay attention to the clean energy revolution because climate change is the existential issue of our time,” said Patricia Demarco, 70, holding one end of a street-wide banner reading: “We Can’t Drink Money.”
Demarco, a member of Marcellus Outreach Butler and Pennsylvanians Against Fracking, said the banner was a warning to landowners in Pennsylvania and beyond not to lease their land to gas companies because of the risk that their drinking water will be contaminated.
“People are selling their land for fracking and then they get their wells poisoned and they end up without drinking water and the value of their home just disappears,” she said.
Demarco, a retiree from Pittsburgh, said she was not content with Clinton’s energy policies, and had been a Bernie supporter, but had decided to vote for Clinton in the general election. Demarco said she would like the next president to ban fracking, end the development of fossil fuels on federal lands, and promote the use of renewable fuels. 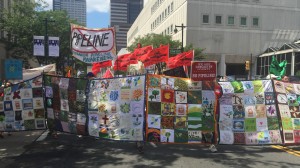 A contingent from Lancaster County marched for clean energy and against fracking ahead of the Democratic National Convention in Philadelphia Sunday afternoon.

Vicki Cahill, 63, a systems analyst from St. David’s, PA, said she would like Clinton to adopt a more aggressive clean-energy policy, but she would vote for Clinton in the presidential election despite having been a Sanders supporter in the primary.
“Because I’m a little bit afraid of Trump,” she said, when asked why she would vote for Clinton. “I’m afraid of Hillary, too but I just feel kind of desperate.”
But Cassandra Inglesby, 27, carrying a placard with a picture of Sanders and yellow post-it notes saying “Join the Political Revolution”, said she would never vote for Clinton in part because of her support for fracking, and said she didn’t care if that meant Trump might win the presidency.
“We can’t think that way if we believe in democracy and vote for things we believe in and not because of fear,” said Inglesby, a game designer from San Francisco who came to Philadelphia for the week of the DNC. “We need to vote for the causes and the people we need leading our country.”