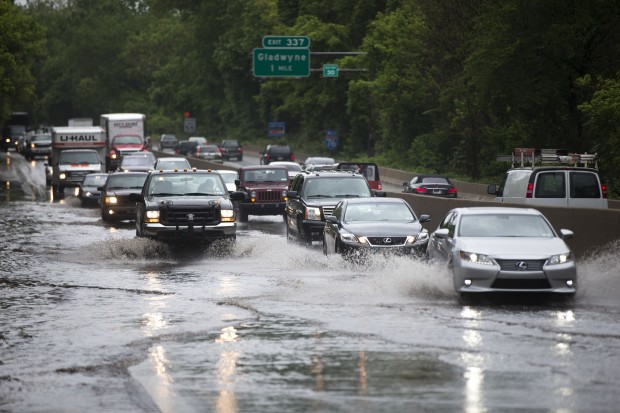 Rising seas and future storms are likely to flood some areas of greater Philadelphia to a depth of four feet or more above the current high tide line by 2040, according to a new climate report released on Thursday.
The report by Climate Central, a Princeton, NJ-based research group, said the projected floods would be the highest since records began in 1900, and would inundate nine square miles of land – most of it in the City of Philadelphia – that lies less than four feet above the high-tide line.
The largest facility that would be flooded under the scenario would be Philadelphia International Airport where property worth an estimated $250 million would be exposed to the rising waters, the report said. Across the whole exposed area, the value of property that would be flooded in the scenario was estimated at $686 million, and would affect about 5,000 people living in 2,000 homes.
Climate Central — which recently issued a separate report on dangerously hot and humid summer days that are likely to affect Philadelphia and other cities because of climate change – said the projection for four feet of flooding was a mid-range scenario among three it that considered.
“Under a mid-range sea-level rise scenario, floods within the Delaware Estuary exceeding four feet are more likely than not to take place by 2040, less than one 30-year mortgage cycle away,” said the report, titled “Pennsylvania and the Surging Sea“.
The expected higher ocean level increases the risk of storm surges flooding low-lying areas like the airport.
“Long before sea level rise permanently submerges new land, it will make its presence felt through higher and more frequent coastal floods, because higher seas raise the launch pad for storm surge,” the report said.
In a low-range scenario, the chances of four-foot flooding are “just below even” while at a higher probability, they rise to three in four, the report said. Under a high-end projection for nine feet of flooding, 29 square miles of land would be inundated in greater Philadelphia, flooding out 27,000 people living in 12,000 homes worth $3.4 billion, it said.
The scenarios are based on federal government projections for about 1.6 feet of sea-level rise along the Pennsylvania coastline by mid-century, compared with 1992 levels, and 4.5 feet by 2100 — the result of rising temperatures and melting polar ice caps that have already raised global ocean levels by about eight inches since 1900.
Greater Philadelphia and other areas of the mid-Atlantic coast are seeing a higher rate of sea-level rise than the global rate because the land is sinking at the same time as ocean levels rise, scientists say.
The study expands on one in 2012 when Climate Central released its first analysis of sea-level rise and coastal flooding threats. The new report uses laser-based elevation data to add many more assets such as schools, hospitals, power plants and low-income populations that are increasingly vulnerable to coastal flooding. The results are available in an online tool, the Surging Seas Risk Finder.
Although the new study projects events in coming decades, there is evidence that flooding is already happening with greater frequency and severity, said Ben Strauss, vice president with Climate Central, and lead author of the study.
He cited data from the National Oceanic and Atmospheric Administration showing that five of the 10 biggest floods in Philadelphia in the last 100 years have occurred since 2010.
The City of Philadelphia, in its own work on the city’s exposure to sea-level rise, does not calculate the risk of storm surge separately but in combination with sea-level rise.
In a report issued in November 2015, the City projected a possible two feet of sea-level rise by 2050 and four to five feet by the end of the century, based on 2013 projections by the UN’s International Panel on Climate Change. Combined with a Category 1 storm, 50 city-owned assets including the airport would be exposed to flooding if seas rise as expected, the report said.
The most vulnerable areas include the airport, the Navy Yard, and parts of the Delaware Riverfront, the City’s report shows.
“Because of Philadelphia’s topography and its location next to tidal rivers, many facilities and other properties are vulnerable to sea level rise, even under conservative sea-level rise scenarios,” it said.
Christine Knapp, director of the City’s Office of Sustainability, said the City is not currently advocating a policy of general “retreat” in response to the rising seas and bigger storms that are expected to come with climate change.
Instead, she urged residents and businesses to assess the exposure of individual properties and decide whether to shore them up from rising waters or avoid building them in the first place if they would be in an area that’s projected to be flooded.
“If you are planning on a highly sensitive asset, if you have zero tolerance for that asset to be inundated, you have to plan on the higher end of sea-level rise projections,” Knapp told StateImpact.
While city officials and private researchers work on broadly similar assumptions about the degree of sea-level rise, data published in March this year showing a faster-than-expected rate of ice melt in the Antarctic could force a sharp upward revision of SLR projections, Strauss said.
“If you believe this model, it suggests that our sea-level rise estimates might be two times too low for this century,” he said.