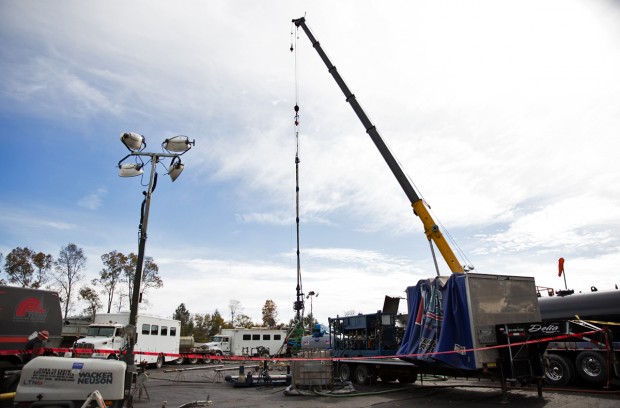 People with asthma face a larger risk of asthma attacks if they live near heavy gas drilling activity in Pennsylvania, compared to those who don’t, according to research by Johns Hopkins Bloomberg School of Public Health, published Monday in the peer-reviewed journal JAMA Internal Medicine. The report “Association Between Unconventional Natural Gas Development in the Marcellus Shale and Asthma Exacerbations,” is the first to make use of extensive electronic health records from the Geisinger Health System, along with state well production data, to examine the impact on asthma.

“Ours is the first to look at asthma but we now have several studies suggesting adverse health outcomes related to the drilling of unconventional natural gas wells,” said Sara G. Rasmussen, the study’s lead researcher and a PhD candidate in the Bloomberg School’s Department of Environmental Health Sciences. “Going forward, we need to focus on the exact reasons why these things are happening, because if we know why, we can help make the industry safer.”

Rasmussen and her colleagues looked at the health records of more than 35,000 Geisinger patients between the ages of 5 and 90 who had asthma. Geisinger has been keeping detailed electronic health records since the early 2000’s, which made for a large data set. The researchers looked at patients health records between 2005 and 2012. The healthcare system encompasses 40 counties in central and northeast Pennsylvania.

“That makes working with the Geisinger data really special,” said Rasmussen. “We know the dates of emergency room visits, hospitalizations, smoking status, medications, and a family’s socio-economic status.” She says other studies relied on self-reported data.

The researchers took the health data and compared it to well production information from the Pennsylvania Department of Environmental Protection as well as the Department of Conservation and Natural Resources and overhead photos supplied by SkyTruth. Looking at four stages of shale gas well activity, which included preparing the well site, drilling, fracking, and production, Rasmussen says they found that people with asthma who live near more intense shale gas activity are 1.5 to 4.4 times more likely to suffer from an asthma attack.

The study also broke up the severity of the asthma attack into three categories, including mild, moderate and severe. Mild included a new asthma medication. Moderate meant a visit to the emergency room, while severe correlated with hospitalization. There were increased associations with mild, moderate and severe incidents.The increased risk was also associated with all four stages of well development.

The study did not look at causation, but Rasmussen says its likely either increased air pollution and/or stress from new industrial activity. Prior studies have shown that stress can trigger asthma attacks. Natural gas development involves increased truck traffic, and the use of diesel engines to power equipment.

The Marcellus Shale Coalition, an industry group, criticized the report, saying it ignored air quality data gathered by the Department of Environmental Protection and Drexel University that showed lower than expected levels of air pollution from shale gas wells.

The Marcellus Shale Coalition emphasized that the study did not find a direct causal link between drilling and increased risk of asthma attacks.

“It’s also striking that the authors failed to provide comparative data from, say, eight years or so prior to shale development emerging in the region,” said Clayton Wright.

One of the report’s authors said comparing a “before” and “after” effect would have made for a “lesser quality” study.

Dr. Brian Schwartz, a Johns Hopkins professor and the study’s senior author, says the results point to a growing body of evidence that shale gas drilling has a negative impact on public health.

“We are concerned with the growing number of studies that have observed health effects associated with this industry,” said Schwartz. “We believe it is time to take a more cautious approach to well development with an eye on environmental and public health impacts.”

Schwartz acknowledged in the paper that he is a fellow at the Post Carbon Institute, a think tank that advocates for renewable energy and questions the abundance of shale gas.

This story was updated with a statement from the Marcellus Shale Coalition.