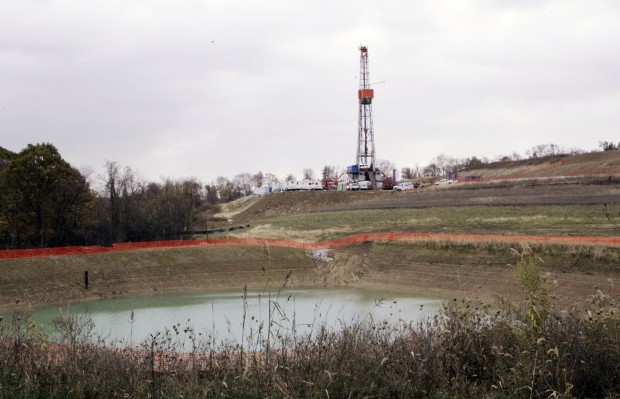 Trade unions are stepping into the fracking fray, pushing back against the opposition to new pipeline projects and natural gas development.

A leading trade union is advocating for increased use of natural gas as a way of helping to meet emission-reduction targets under the federal Clean Power Plan for existing power plants and to fill what it says will be an energy deficit when coal-fired power plants are retired.
The Laborers International Union of North America launched a national campaign to argue that the increased use of natural gas will also create jobs while contributing to a cut in greenhouse gas emissions.
The union, with about 500,000 members, said renewable energy on its own won’t be enough to make up for a shortage of energy resulting from increasing demand and reduced supply because of a dwindling number of coal-fired power generators.
In Pennsylvania, there’s expected to be a shortfall of 22 percent
by 2030 between the amount of energy the state needs and what it produces from natural gas, nuclear, coal and renewables, the union said in a study on its website.
Of the total, renewables would contribute only 2 percent, the study said. It argued that for solar alone to fill the projected energy shortage, the state would have to build 219,000 acres of solar panels, covering an area 2.5 times the size of the City of Philadelphia at a cost of $103 billion.
By 2030, natural gas is expected to contribute 18 percent of Pennsylvania’s energy needs, behind coal with 30 percent and nuclear with 26 percent, the study said.
The state’s projected energy shortage will reflect its need to cut emissions by 23 percent by 2030 under the CPP, and the fact that 39 percent of its energy production comes from high-energy sources such as coal, the union said.
On June 23, Gov. Tom Wolf signed SB1195, a bill that provides more time for lawmakers to examine and approve the state’s plans for meeting CPP targets which the law’s supporters say will have a “devastating” impact on the energy industry. Environmentalists say the new law will delay Pennsylvania’s efforts to comply with the CPP.
The campaign, called “Clean Power Progress” is designed to cut through “the politics and ideology that have distorted the debate on clean energy,” said the union’s General President, Terry O’Sullivan, in a statement. The campaign “will demonstrate that if we develop this resource to the highest standards, we can keep the lights on and help cut America’s greenhouse gas emissions.”
As Pennsylvania begins a massive buildout of pipelines to take natural gas to market, the new campaign will help policymakers and elected representatives to “identify” infrastructure needs, the campaign said.
Ericka Reyes, a spokeswoman for the campaign, said it was entirely paid for by the union. She could not say how much the campaign is costing. She said the campaign would focus on public education through social media.
Environmental advocates argue that, while carbon emissions from burning natural gas to generate electricity are lower than those for coal, gas has a range of negative environmental effects that undermine the union’s case for it helping to meet CPP targets.
Augusta Wilson, a staff attorney at the Clean Air Council in Philadelphia, said the extraction, production and transportation of unconventional natural gas can harm air quality and ground water, while the process has been shown to leak methane, a much more potent greenhouse gas than carbon dioxide.
The combination of negative effects calls into question the union’s argument that natural gas helps meet the CPP, Wilson said. “There don’t appear to be many, if any climate benefits of natural gas over coal,” she said.
Myron Arnowitt, Pennsylvania director for Clean Water Action, said CPP compliance would rely on the widespread adoption of renewable energy and energy efficiency.
“The main impact of boosting the use of natural gas will be to raise the price of gas, something the gas industry has been trying to get to happen for some time,” he said.
But Reid Porter, a spokesman for the American Petroleum Institute, said increased use of natural gas at power plants cuts emissions quickly and at low cost. He said increased use of natural gas has driven U.S. carbon emissions to near 20-year lows while domestic production of natural gas and crude oil has surged, thanks to the spread of fracking technology.
“Increased use of natural gas has helped make the United States a global leader in reducing carbon emissions,” Porter said.