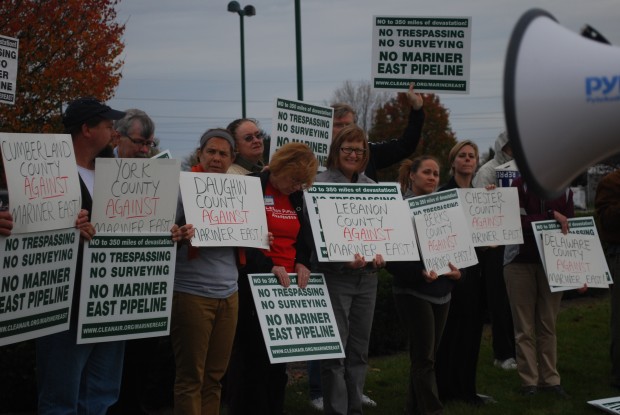 Anti-fracking groups like this one opposing a natural gas pipeline have a right to protest local government policy such as zoning changes, a judge has ruled.

A Pennsylvania judge has dismissed an attempt by a group of natural gas leaseholders seeking to block environmentalists’ objections to a township’s plans to open itself up to gas drilling.
Judge Michael Yeager of the Butler County Court of Common Pleas struck down a lawsuit by a property developer and 12 co-plaintiffs who said that critics of a pro-drilling ordinance in Middlesex Township, Butler County were interfering with the leaseholders’ rights.
Judge Yeager ruled on May 25 that the critics’ objections to the ordinance fell under the U.S. Constitution’s protection of speech that allows individuals the right to argue against government policies.
“It is clear to this Court that Defendants engaged in protected activity,” the judge wrote in a 12-page opinion.
Although the judge defended the opponents’ right to make their arguments, the decision did not affect his earlier ruling in favor of the township’s new zoning ordinance which increased the amount of township land available for industrial activity such as gas drilling to about 90 percent from around a third before the new policy became effective.
The environmental groups Delaware Riverkeeper Network and Clean Air Council, plus five Butler County residents, filed a series of legal objections to the ordinance and a permit to allow the construction of six gas wells by a unit of Rex Energy on a site within a mile of a school campus.
The plaintiffs, led by Dewey Homes and Investment Properties, accused the environmental groups of using their legal tactics to “harass, delay and interfere with the Plaintiffs’ oil and gas contracts,” the judge wrote.
He dismissed the leaseholders’ suit in its entirety, saying that their opponents were within their rights to object to the gas-drilling plan.
“While Plaintiffs vehemently argue that Defendants’ actions with respect to the Zoning Hearing Board were a ‘sham’, this Court can’t in good conscience accept such an argument when it clearly found that the Riverkeeper Defendants ‘made a strong showing’ that their challenges to Ordinance 127 and the permit would succeed on the merits,” the judge wrote.
The defendants were aided by the Pennsylvania branch of the American Civil Liberties Union, which argued in court against the leaseholders’ suit on First Amendment grounds. The ACLU criticized the leaseholders’ action as a “SLAPP” suit – a legal acronym standing for Strategic Lawsuit Against Public Participation – which is designed to discourage parties from filing their claims by making it expensive, time-consuming and stressful to do so, regardless of the legal merits of the case.
Vic Walczak, legal director for ACLU PA, said the judge’s ruling affirms people’s rights to argue against government policy even if they don’t win the argument.
“Under the First Amendment, people who speak out and legally oppose government activity cannot be sued for engaging in these time-honored political and legal hallmarks of our democracy,” Walczak said in a statement.
He said the ruling appears to be the first in Pennsylvania to affirm the right of fracking opponents to make their arguments against government policy on gas development.
“To our knowledge, this is the first time a fracking-related lawsuit against anti-frackers has been dismissed on First Amendment grounds,” Walczak said in an interview.
Pennsylvania has a statute designed to prevent SLAPP suits but the law was undermined by a court decision that exempts zoning ordinances, Walczak said. For that reason, the ACLU argued the case on protected-speech grounds.
The case cannot be refiled but it can be appealed, an action that would give the ACLU and its allies the opportunity to argue their case in a higher court, Walczak said.
It’s unclear whether the ruling will encourage more local opponents to the gas industry, Walczak said, but a loss would have chilled public debate.
“If they had won, this would have discouraged other anti-fracking folks,” he said.
In October 2014, the environmental groups, plus four of the residents, challenged the zoning amendment on the ground that it removed protections to residential neighborhoods from industrial activities; violated the Environmental Rights Amendment of the Pennsylvania Constitution, and failed to protect public health, safety and welfare by allowing shale gas development in residential areas.
Maya van Rossum, who heads Delaware Riverkeeper Network, said the judge’s decision recognizes people’s right to challenge government decisions such as the township ordinance.
“Dewey Homes’ efforts to misuse the law to try to scare us into silence was wrong,” van Rossum said in a statement. “Judge Yeager has sent an important message that SLAPP suits designed to silence will not be tolerated.”
The developer’s president, Ryan Dewey, did not return a phone call seeking comment on the judge’s ruling.