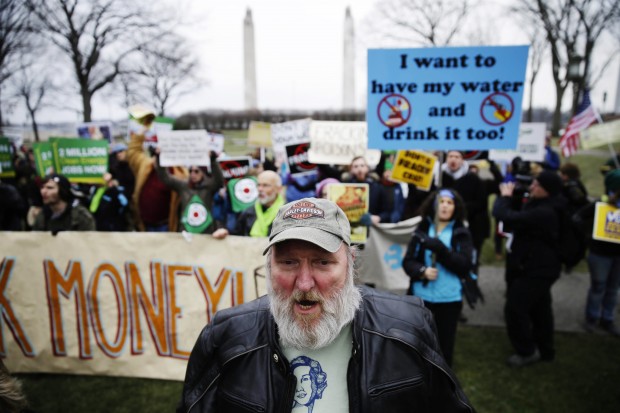 Hydraulic fracturing opponents, including Ray Kemble of Dimock, Pa., front, demonstrate before Gov. Tom Wolf takes the oath of office to become the 47th governor of Pennsylvania in Harrisburg, January, 2015.

A federal public health report on Dimock’s much-publicized water woes found threatening levels of chemicals in 27 private water wells, and explosive levels of methane in 17 private water wells during a six-month period in 2012. The results were based on samples taken four years ago, while a moratorium on hydraulic fracturing in the area was in place. The chemicals include cancer-causing levels of arsenic in 13 wells. Other substances include potentially toxic levels of cadmium, copper, iron, lead, lithium, manganese, potassium, sodium and 4-chlorophenyl phenyl ether.
The report, a “health consultation” by the Agency for Toxic Substances and Disease Registry (ATSDR), which is part of the Centers for Disease Control, looked at data from 64 private drinking water wells and also found an immediate risk of explosion in five homes due to high levels of methane in their water, and potential threats to another 12 homes. None of the information is new to the resident’s themselves, who each received a toxicology report from the EPA and ATSDR back in 2012. Some residents requested and received visits by federal researchers and experts at the time to explain the results.
The report does not analyze current water samples, and makes no conclusions about the status of the well water today. It does not identify the source of these chemicals, some of which could be naturally occurring. The authors of the report say some issues with the water-quality remain, but this is most likely the result of anecdotal information from residents themselves, not new data.

“Problems remain for a number of residential water wells that make water undesirable for consumption, including cloudiness and effervescence (from elevated methane), elevated metals/salts and total dissolved solids (e.g., discoloration, cloudiness, etc.), pH, and bacteriological contamination (including fecal coliform in one well).”

One of the most significant gaps in the data is the lack of pre-drill water testing, which was not mandated at the start of the gas drilling boom in Susquehanna County in 2008.  And although the Pennsylvania Department of Environmental Protection determined that gas drilling led to high levels of methane in Dimock’s water wells, neither the DEP nor the EPA has made a direct connection between the chemical contaminants and nearby gas drilling. Cabot Oil and Gas, the company drilling in the area at the time, disagreed with the DEP’s conclusion and says its drilling activity did not result in methane contamination. The fact that the  data dates back to 2012 means that the agency cannot make any firm “public health conclusions about current and future exposures” to chemicals. But there were clear public health threats based on the data gathered back in 2012.
At the time, the agency recommended continued well water treatment for some residential wells, as well as flushing water pipes before use, and in some cases, the use of an alternative water supply. For those with high levels of methane, the recommendation included ventilation at the well head, as well as methane monitors in the home. It also recommended continued water testing. It did not have data to reach any conclusions as to whether or not the recommendations were, or continue to be, effective.
The data analyzed by the ATSDR was gathered by the EPA, which in 2012, reported it found no unsafe levels of toxins in Dimock water wells that would warrant further action by the federal government. The EPA says it did find hazardous levels of barium, arsenic or manganese in the water supplies of five households. But the EPA said treatment systems could reduce the amount of toxins to safe levels. 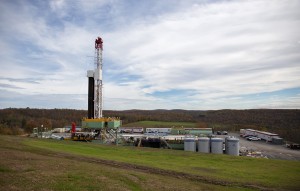 The difference between the two reports reflects the different mandates at the two agencies. Although the same data set was used, the EPA as a regulatory agency specifically looked at whether or not it was required to take action under the Comprehensive Environmental Response, Compensation, and Liability Act, more commonly known as Superfund, which governs responses to environmental emergencies.
The Agency for Toxic Substances and Disease Registry, however, is not a regulatory agency and has no enforcement authority. The “health consultation” looked at the entire data set from a public health standpoint, assessing whether or not it was safe to drink the water. The ATSDR report is broader and more comprehensive. The agency did not research the source of the contaminants.
Although individual residents received this data four years ago, this is the first time the public has had access to the results as well as a public health analysis. ATSDR spokeswoman Susan McBreairty says it took four years to complete the assessment due to the complexity of the case:

“The ATSDR Dimock report required time due to the complexity of the data set in an area of emerging science and policy,” McBreaity wrote in an email. “The data set included samples from 64 wells with over 200 specific analyses per well.  This report required a thorough scientific internal and external review and clearance process to ensure the report represents the best science.”

Ever since high levels of methane in a residential water well caused an explosion on January 1, 2009, Dimock has been in the crosshairs of a national debate over fracking.  In 2009, the DEP found Cabot Oil and Gas responsible for the presence of methane in 10 water wells. That same year 15 families filed a federal lawsuit against the company. Cabot says their actions did not pollute Dimock’s water wells.
In a statement released by Cabot on Wednesday, it emphasized that the ATSDR report does not link the company with any of the contaminants documented.

“This data is consistent with thousands of pages of water data collected by both Cabot and the Pennsylvania Department of Environmental Protection (DEP) and does not indicate that those contaminants detected have any relationship to oil and gas development in Dimock.”

Cabot says the methane detected in Dimock’s water wells results from “preexisting, naturally-occurring methane in the area prior to any natural gas activity [and] has been confirmed by numerous agencies and testimony by life-long residents. And within the study itself, the ATSDR clearly states the data was included “regardless of the source of the contaminant in the residential well.”
However, the DEP has never back-tracked on its conclusion that the company’s activities caused methane to migrate into some of the resident’s private water wells. The DEP has said the problem can be resolved using a ventilation system.
DEP says it continues to investigate Cabot’s remediation of Dimock’s water wells, and was not surprised by the ATSDR report.
“The ATSDR report confirms what DEP knew in 2012 regarding the methane, naturally occurring salts, and other chemicals in the water near Dimock,” DEP said in a statement.
The agency says it will share current water sampling data with the ATSDR. A moratorium on new drilling imposed by the DEP back in 2009 remains in a nine square mile area referred to as the “Dimock Box.”

“The impacts identified by the ATSDR report further underscore the need to ensure that the natural gas industry is properly regulated and that DEP has the necessary resources to oversee this activity.”

Of the original 15 families who filed a federal lawsuit, all but two settled with the company in 2012, after the EPA ended its probe. On March 10, 2016 a federal jury found Cabot Oil and Gas negligent for polluting the remaining plaintiffs’ water wells and awarded the two families a total of $4.24 million. Cabot says it will appeal the ruling.
*This article has been updated with a response from the Pennsylvania Department of Environmental Protection and the Agency for Toxic Substances and Disease Registry.