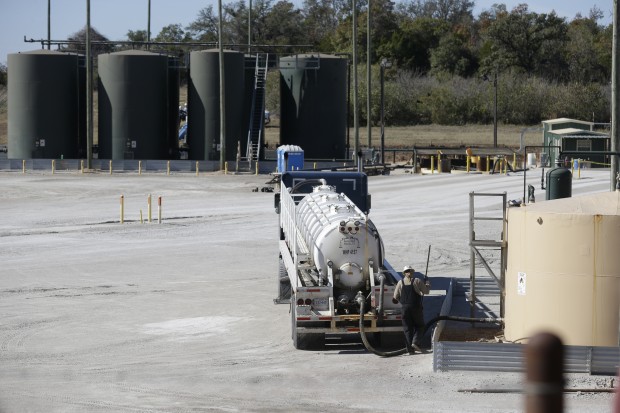 In this Wednesday, Nov. 19, 2014 photo, a fracking wastewater storage facility sits just outside the city limits of Reno, Texas. With real-time monitors, scientists have linked a swarm of small earthquakes west of Fort Worth, Texas, to nearby natural gas wells and wastewater injection.

A series of five small earthquakes within the space of 24 hours in Lawrence County, near the Ohio border, has led to the shutdown of nearby fracking operations. The earthquakes range in magnitude from 1.69 on the richter scale to 1.91, which are small and typically not felt on the surface. The quakes occurred just after midnight on Monday in the vicinity of Mahoning Township, with the last one registered at 10:10 PM the same day, according to the U.S. Geological Survey. Department of Environmental Protection spokesman Neil Shader says Hilcorp Energy shut down their operation on Tuesday and the DEP is investigating whether the string of small quakes were caused by fracking.
Penn State professor Andrew Nyblade says there is a correlation, in space and time, between the quakes and the fracking operation, but a causal link has not yet been established.
“These are the first seismic events that have been correlated to fracking [in Pennsylvania],” said Nyblade. “That’s not to say this hasn’t happened before.”
One of Nyblade’s graduate students, Kyle Homman, recently completed research and wrote his thesis on seismicity in the state, and did not find evidence linking earthquakes to oil and gas activity. The study spanned 23 months, from February 2013 to December, 2014. Nyblade says the research located more than 1500 “seismic events,” and linked them to blasting activities at coal mines and quarries. He says there were about 10 earthquakes not linked to mining activity.
Earthquakes caused by fracking are rare. It’s more common to see earthquakes result from the disposal of oil and gas waste water through deep injection wells, such as the recent spate of  earthquake activity in Oklahoma. Last month, the U.S.G.S published a forecast of natural and human induced earthquakes across the nation. Pennsylvania showed no threat of any significant quakes. The U.S.G.S also said fracking is not the major cause of human induced earthquakes.
But a series of small earthquakes two years ago in Poland Township, Ohio, which is about nine miles west of the area where the five earthquakes were registered on Monday, were linked to fracking. Those quakes also resulted from activity by the same company that recently halted operations in Lawrence County, Hilcorp Energy.  A company spokesperson could not be reached for comment.
The study published in the Bulletin of the Seismological Society of America, and authored by professors at Ohio’s Miami University, found that 77 earthquakes that occurred within a week in March, 2014 were “closely related spatially and temporally to active hydraulic fracturing operations.”  Earthquakes Induced by Hydraulic Fracturing in Poland Township, Ohio, published in in the Bulletin in February, 2015, concluded that the fracking activity caused a previously unknown fault in the basement rock, below the area of fracture, to slip, resulting in the quakes.

“We identified earthquakes as small as local magnitudes (ML) ∼1 up to 3, potentially one of the largest earthquakes induced by hydraulic fracturing in the United States,” wrote the paper’s authors.

David Yoxtheimer, from Penn State’s Marcellus Center for Outreach and Education, says it’s not unusual for Pennsylvania to experience earthquakes that are less than 2.0. He says it’s common for the gas industry to detect micro-seismic events when fracking, which they use to determine how far the fracture has traveled from the well bore.
“When you think you have something greater than 2 or 3,” Yoxtheimer said, “it would suggest that there may be a fault that had some minor movement along that fault, which would then translate into a higher magnitude seismic event.”

Yoxtheimer says he calculated that the Hilcorp well pads, which are under the name of North Beaver NC Development include wells 7H, 9H, 10H and 12H, and are located between 6700 and 9700 feet from the epicenters of the quakes.

Penn State has been contracted by the state to install 30 seismic monitors as part of a project to establish a baseline for seismic activity, and determine if any is caused by oil and gas activity, as well as mining. The Department of Environmental Protection as well as the Department of Conservation and Natural Resources will coordinate a total of 42 new monitors across Pennsylvania, where real time information on earthquakes will be publicly available.
Andrew Nyblade is leading Penn State’s efforts to place them on campuses and in state parks.
“The DCNR and DEP get kudos for supporting a network like this with open access to the data,” said Nyblade. “That’s not the case in other states.”
Nyblade will be leading a webinar on the project next month.