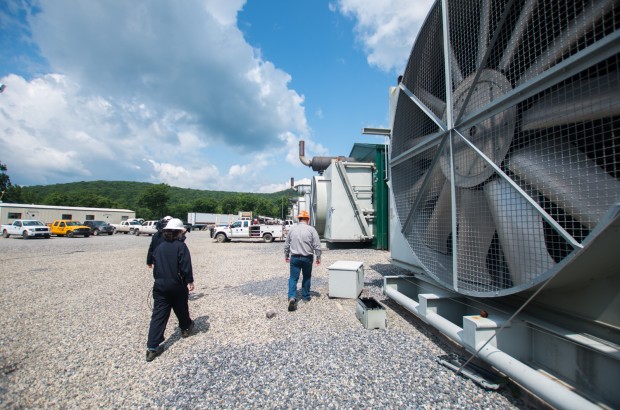 DEP regulators want to get better at tracking fine particulate air pollution from natural gas infrastructure, such as these compressor units in the Loyalsock State Forest.

State environmental regulators are planning a major expansion of air quality monitoring, which will be focused on Marcellus Shale natural gas infrastructure.
“We heard the concerns of shalefield residents, and we are responding,” John Quigley, head of the state Department of Environmental Protection said in a teleconference announcement Wednesday. “We have been looking at the need to close data gaps since the beginning of this administration.”
DEP will spend $1.56 million over the next five years to grow its current network of 27 monitoring sites. The department will add 10 new continuous sensors to track fine particulate matter in counties with a lot of Marcellus Shale development in the northern and southwestern parts of the state. Regulators say they will try to place monitors close to clusters of large natural gas compressor stations, which process and transport gas from wells through pipelines.
Fine particulate matter is produced by a wide range of industrial activities. Health impacts include decreased lung function and respiratory problems, such as asthma. Last month DEP installed new monitors in Greene and Bradford counties. More will be set up in Fayette, Indiana, Lycoming, Susquehanna, and Wyoming, counties by the end of this year, with additional monitors coming online in Clarion, Jefferson, and McKean counties by the fall of 2017.
Quigley expects the effort will help the department get better at forecasting air quality issues and enforcement. He says he doesn’t know whether it will ultimately lead to new regulations for the gas industry.
“We have no expectations here,” says Quigley. “The ambition is to get a more comprehensive dataset.”
Stephanie Catarino Wissman heads the Pennsylvania division of the American Petroleum Institute, an oil and gas industry trade group. She says the industry already complies with, “a comprehensive set of state, local, and national regulations, including the Clean Air Act, which ensure the health and safety of local communities.”
Rob Altenburg is the director of the Energy Center for the environmental group, PennFuture. He says more monitoring is a good idea, but thinks DEP could go further.
“The question people have been asking us has been, ‘Why just particulate matter?'” says Altenburg. “We’ve been pretty active at looking at methane emissions. We have to get a better handle on that.”
Methane is the main component of natural gas and is much more powerful as a heat-trapping greenhouse gas compared to carbon dioxide, although it stays in the atmosphere for a shorter time period. Earlier this year the DEP announced it would create a new general permit to try to curb methane emissions unconventional wellpads. The agency is also drafting new regulations to curb leaks from existing sources which should be finalized by the end of 2017.