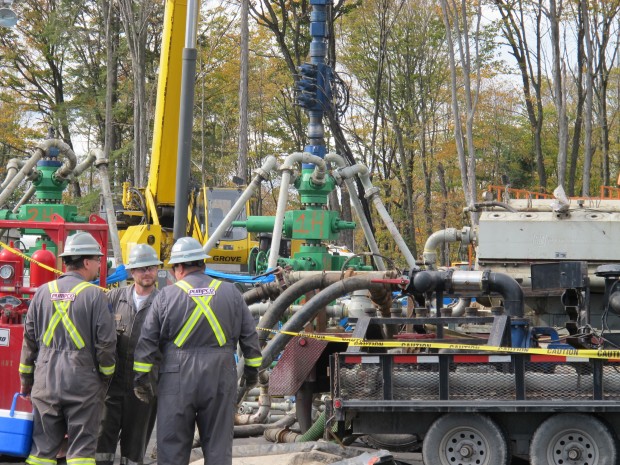 Democratic candidate for attorney general Josh Shapiro is taking a hard line on gas drillers in a TV ad that began airing more than a week ago.
“In the last eight years, the fracking industry has spent over $40 million dollars on lobbying in Pennsylvania,” Shapiro says in the ad, referring to a 2014 report by the watchdog group Common Cause Pennsylvania. The report found the industry spent nearly $50 million lobbying state lawmakers and donating to political candidates between 2007 and 2014.
“So it’s no surprise that even though they’ve had over 4,000 violations, all they’ve gotten is just a slap on the wrist,” Shapiro continues.
Under Pennsylvania’s current Attorney General, Kathleen Kane, the office brought criminal charges against XTO Energy in 2013 for a wastewater spill in Lycoming County. Then, in 2014, her office filed a criminal complaint against EQT Corp. on behalf of the Pennsylvania Fish and Boat Commission for an impoundment leak in Tioga County. Last year, the office filed suit against Chesapeake Energy, seeking millions of dollars for Pennsylvanians who accused the company of cheating them out of royalties.

Speaking on WHYY’s Radio Times, Shapiro said the state Attorney General’s office has filed criminal charges against two gas companies, despite thousands of documented violations.
“I am going to beef up the environmental crimes division within the A.G.’s office and the public protection division and go after the frackers,” he said.
Shapiro, a Montgomery County Commissioner, also wants to step up coordination between the A.G.’s office and state environmental regulators.
During a recent debate for Democratic candidates on NBC 10, Northampton County District Attorney John Morganelli said he agrees with Shapiro’s plan. According to Pennsylvania law, the A.G.’s office cannot take action to prosecute those who violate state environmental statutes unless the case has been referred by the state Department of Environmental Protection or a county district attorney.
“And whenever we send these cases up, what I find is that it’s very rare… that you’ll see a criminal prosecution,” said Morganelli, who believes there are two reasons that could be the case.
First, he said the environmental crimes unit may not have enough resources. Second, Morganelli said, it’s more difficult to hold companies criminally liable for breaking environmental laws, as opposed to imposing civil penalties.
“It’s a heavy burden for a criminal prosecution and the A.G.’s office may be reluctant to bring one,” he said.
During the same debate, Allegheny County District Attorney Steve Zappala offered a more untested proposal. Zappala said in the few places where drilling has not taken place, he would meet with oil and gas companies before they begin their work.
“And I’d say, ‘We’re going to engineer this properly, we’re going to do it right on the front end because people are afraid of you polluting their drinking water,’” he said. “If that would not be acceptable to have our people or the county’s people there watching exactly how the engineering was taking place or what chemicals were being injected into the ground, then I would sue them.”
Zappala spokesman Marty Marks said he has had similar meetings with developers in Allegheny County in his role as district attorney.
However, former Department of Environmental Protection Secretary David Hess questioned whether the office would have the resources to meet with gas companies and supervise drilling sites.
“The authority of the A.G. is it takes cases on referral, so I’ve never heard of a circumstance where that sort of thing has happened,” Hess said.
The Republicans in the race, including state Sen. John Rafferty, are more cautious about targeting a single industry or making commitments to strengthening one unit of the office.
Rafferty spokesman Mike Barley criticized Shapiro for “demagoguing” on the fracking issue.
“While it’s important to go after bad actors, it’s not in the interest for the office to label entire industries as bad actors,” Barley said.
Rafferty’s opponent, former Executive Deputy Attorney General Joe Peters said he would have to wait until he’s in office to evaluate whether the environmental crimes unit needs more resources than say, the narcotics unit.
“When we have the opioid and heroin addiction and people dying in our commonwealth, people would want you to [strengthen] the drug enforcement areas,” said Peters.