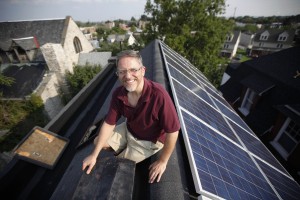 Solar panels: Could they help PECO meet renewable energy requirements if they were installed across North Philadelphia?

Solar power advocates are urging southeastern Pennsylvania’s biggest utility to boost its use of solar-generated electricity by buying from potential installations on the rooftops of North Philadelphia.
About 40 supporters of the Earth Quaker Action Team (EQAT) gathered in the lobby of PECO’s Philadelphia headquarters on Wednesday to urge officials to support one of the city’s poorest areas by agreeing to purchase any solar power generated there.
The group wants to install solar panels on public buildings like churches, community centers and schools, as well as private homes, and predicts that investors will come forward for such projects if PECO shows that there is demand for the power.
“We think that if PECO provides the demand, then the other pieces of the puzzle are really in place,” said Greg Holt, a member of the Quaker group.
If PECO met a Public Utility Commission requirement to increase its purchase of solar power this year by 0.1 percent, and did so from North Philadelphia rooftops, it would create at least 70 jobs in a section that has some of the city’s highest rates of poverty and crime, EQAT said.
PECO spokesman Ben Armstrong said the utility is open to buying solar power from North Philadelphia but is legally required to buy competitively priced electricity, and is unaware of any active solar-power generating program in North Philadelphia.
“Right now we’re not aware of any solar power that is actually available from North Philadelphia but if there is, we’d be interested in understanding about it,” Armstrong said.
“We’ve been looking at what the Earth Quaker Action Team has requested of PECO and we know that we don’t have the ability to fulfill,” he said. “They are looking for us to purchase electricity that’s generated from solar panels in North Philadelphia and we don’t know that that’s available or whether it would be at the lowest possible price,” Armstrong said. He said that about 60% of PECO’s solar power is generated in Pennsylvania.
Eileen Flanagan, board chair of the Quaker group, told the rally that the proposal to generate commercial quantities of solar power in North Philadelphia would address the need to combat climate change while addressing concerns about racial justice and economic inequality.
Hurricane Katrina in 2005 showed that the poor, and people of color, can be more vulnerable to climate change than other sectors of the population, Flanagan said.
“We are all in this together the way we are all in the Titanic together,” she told the supporters, some dressed in green T-shirts. “Some of us have access to lifeboats but we are still on a ship that’s headed for an iceberg.”
Deployment of solar energy like that proposed for North Philadelphia increases the use of renewable fuels while creating jobs and helping to cut economic inequality, especially for the neighborhood’s African American population, she said.
If rooftop solar panels were installed throughout the Philadelphia region, they could supply 20% of total electricity demand, and would create at least 4,000 local jobs, EQAT said, citing estimates from the American Council for an Energy-Efficient Economy and the National Renewable Energy Laboratory.
The group said PECO could meet the PUC’s requirement to increase its purchase of solar power this year by 15.9 million kilowatt hours if it drew power from 32.8 acres of solar panels.
In the context of North Philadelphia, the proposed area of solar panels would, if combined, occupy an area about a quarter the size of Temple University’s campus, although the panels would be spread across suitable rooftops, EQAT said.
According to a recent estimate by Penn Environment, solar panels on around 100 acres of usable rooftop space on Philadelphia public schools would generate more than a third of the school district’s annual electricity needs, creating 750 installation jobs for a year, and saving $13 million on utility bills.