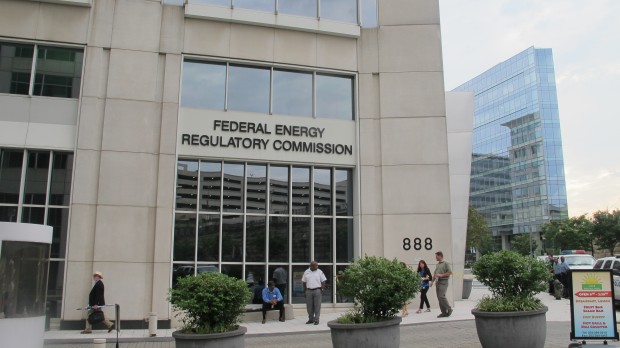 FERC's offices in Washington D.C. The commission was directed by Congress in 1978 to create an Office of Public Participation, but it never happened.

More than 30 groups representing consumer advocates and environmental organizations have filed a petition asking the Federal Energy Regulatory Commission to create an office of public participation.
In 1978 Congress directed FERC to create the office, but it never happened.
FERC regulates the interstate transmission of natural gas, oil, and electricity. In Pennsylvania it has been at the center of the controversy around the building boom of pipelines to transport Marcellus Shale gas.
Tyson Slocum is Energy Program Director at Public Citizen, a Washington D.C. group that filed the petition. He says when it comes to FERC, the deck is stacked against the public interest.
“It’s not because FERC is corrupt, as some allege,” says Slocum. “But in order to meaningfully participate in the numerous and complex dockets one must possess significant financial resources.”
If FERC sides with the petitioners, the 1978 statute provides for what’s known as “intervenor compensation.” It allows entities that substantially contribute to a proceeding to receive payment to cover their legal costs for intervening. The state of California has a similar program.
“That is groundbreaking. There is no other federal program where intervenor compensation is available,” Slocum says. “Not every advocate is due compensation. Not just any Joe Schmo can put together a petition. Only those who substantially contribute. You can’t spam FERC and then say you’d like to be paid. Your intervention has to impact a final order.”
He says it would allow public interest groups like his to get a seat at the table.
“We would be eligible under the statute to get some of our costs back,” he says. “Presently, we have no capacity to hire any expert witnesses, like an economist or an analyst.”
When asked for comment, a FERC spokeswoman said the commission does not respond to petitions through the media.