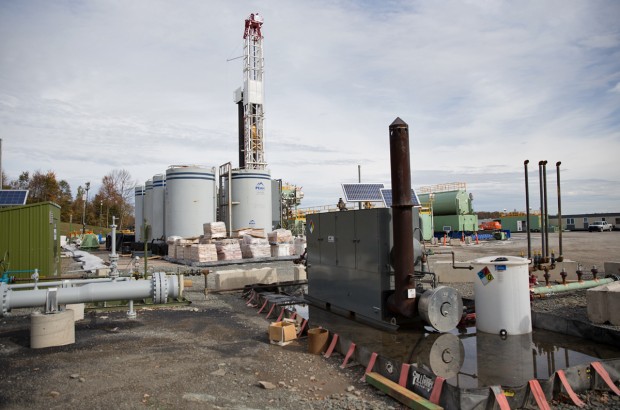 This is the third time Cabot has faced penalties for drilling before it received permission from the Susquehanna River Basin Commission.

Cabot Oil and Gas is paying an $11,000 settlement to the Susquehanna River Basin Commission for commencing gas drilling operations before it received permission to do so. Last year the company paid a $50,000 to the commission for a similar infraction.
Every gas wellpad needs to have the SRBC’s approval before drilling operations can begin. Commission spokeswoman Gwyn Rowland says Cabot is paying for a violation that occurred in 2013 in Susquehanna County. It was discovered during a recent audit of several natural gas companies.
“We found some discrepancies between what they reported to the state Department of Environmental Protection and to us,” she says. “They had started drilling prior to getting our approval. They went ahead early on two wells for a total of 21 days.”
This is the third time Cabot was found to have started drilling before it received SRBC approval. The other instances occurred in 2008 and 2014.  Cabot spokesman George Stark says the company has taken preventative measures to avoid the issue in the future.
“This is not a repeat violation, but rather an historical issue involving a misinterpretation of the regulations that has since been corrected,” he wrote in an email.
Rowland says early drilling has not happened with any of the other companies under the commission’s jurisdiction. She attributed it to miscommunication within Cabot.
“While certain employees in the company know about things, sometimes that doesn’t get filtered down to the ground,” says Rowland. “Obviously that’s not an excuse for what happened.”