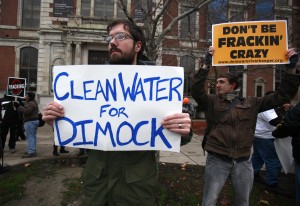 Protesters stand in front of the Academy of Natural Sciences in Philadelphia. Two families were awarded a total of $4.24 million by a federal jury on Thursday.

An eight-member federal jury found Cabot Oil and Gas negligent and ordered the driller to pay a total of $4.24 million to two Dimock families for polluting their well water starting back in 2008. The company says it will appeal the decision.
Only two families out of the original 44 plaintiffs in the case against Cabot Oil and Gas went to trial after years of delays, lack of representation, and legal setbacks. Lead plaintiff Scott Ely worked for the driller before becoming a whistleblower.
“I saw so much on these job sites,” he said after the verdict. “I’m not only working for them I’m also a resident and as I’m working for them, I end up becoming a victim of it.”
Ely testified that even today, his water is still brown and muddy. He says he persisted with the case even when his original attorneys had dropped out and he had to represent himself. The other plaintiffs settled with the company and signed nondisclosure agreements that prevent them from speaking about their water issues. Ely says he always wanted his day in court.
“This is America and we’re supposed to stand up for ourselves,” he said. “There’s a lot of neighbors who couldn’t be here. It’s like [I’m] sharing their voices, the ones who couldn’t get into the courtroom. [The jury] is vindicating them.”
Dimock’s water troubles date back to 2008, when Cabot Oil and Gas began drilling in Susquehanna County. In 2009, the Department of Environmental Protection found the company responsible for contaminating the village water supplies with methane. But the plaintiff attorneys were not allowed to present that as evidence.
The publicity surrounding the case of Dimock’s water helped touch off a global anti-fracking movement.
Filmmaker Josh Fox brought attention to Dimock’s struggle with Cabot Oil and Gas in the documentary Gasland.
“The gas industry and the frackers went down in the flames of Dimock’s water today,” he told StateImpact. “The sense of relief and joy and vindication, it’s beyond words.”
Scott Ely and his wife Monica Marta-Ely each received $1.3 million while their three children were awarded $50,000 each. Ray and Victoria Hubert, who are tenants on the Ely’s property each received $720,000 and their daughter was awarded $50,000.
The Ely and Hubert’s attorney Leslie Lewis said she was “enormously relieved” by the verdict.
“Using actual evidence, they were able to find the truth,” Lewis said.
Lewis says members of the jury told Monica Marta-Ely that they were impressed by the testimony of her children.
Cabot Oil and Gas says the company is surprised by the decision and will appeal. In a statement, the gas driller says the jury’s verdict “disregards overwhelming scientific and factual evidence that Cabot acted as a prudent operator in conducting its operations.” The company said it would be filing motions to appeal “based upon lack of evidence as well as conduct of plaintiff’s counsel calculated to deprive Cabot of a fair trial.”
Plaintiff’s attorney Elisabeth Radow said she had no comment about Cabot’s statement. But she did say the system worked in this case.
“This is a good day,” she said. “This is a really good day. The jury listened to these people and they listened to what they said. They believed they were honest and they were credible and that’s where the vote went.”