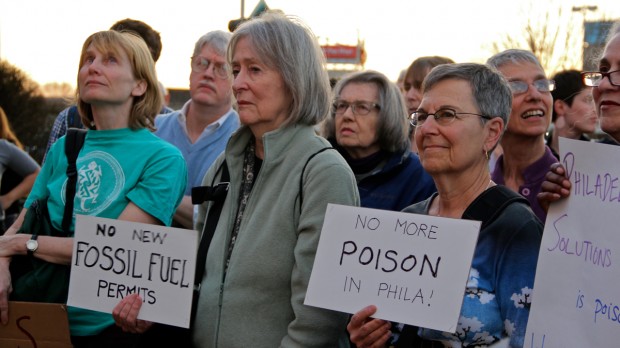 Protesters rally outside the Sheet Metal Workers Hall on Columbus Boulevard, where the Philadelphia Regional Port Authority held a public outreach event to get community input on proposals for the Southport Marine Terminal.

Environmental groups fighting efforts to make Philadelphia an “energy hub” for Marcellus Shale gas have found their first target: a proposal by a refiner to build an oil import/export terminal on the Delaware River.
The plan by Philadelphia Energy Solutions is one of six being evaluated by the Philadelphia Regional Port Authority, which wants to develop its 194 acre Southport Marine Terminal Complex. The company’s CEO Phil Rinaldi is one of the chief architects of the “energy hub” plan, which involves using Pennsylvania’s abundant supply of Marcellus Shale natural gas to revive the city’s manufacturing sector.
Rabbi Mordechai Liebling with the Green Justice Philly coalition said fighting Philadelphia Energy Solution’s bid for Southport is the group’s first shot across the bow.
“This is their first concrete plan at expansion,” said Liebling. “If they can get a port in here, there will be much more oil coming through Philadelphia, so we want to be clear we don’t want that to happen.”
Liebling was one of roughly 60 people from the coalition who packed a public meeting hosted by the Port Authority Wednesday night to oppose the refinery’s proposal for Southport. Green Justice Philly formed last October to fight the “energy hub” and push for local action on climate change by urging officials to reject projects that would promote the use of fossil fuels and increase greenhouse gas emissions.
At Wednesday night’s meeting, officials reviewed the six proposals that made the authority’s shortlist, including plans for a warehouse, a container port, and a storage and processing facility for cars. One proposal combines plans for a container port and a 35-acre “energy park” and another combines bulk product storage with the possibility of handling energy and fertilizer products down the road.
For about two hours, speakers questioned three port authority officials about how they would evaluate the environmental impacts of the proposals — and why they were considering any developers with plans that involve fossil fuels.
“We’re really trying to be as environmentally responsible as a nation and as a globe and we have to have all our future planning aligned with sustainability,” said Dr. Matthew Schwartz, a physician from the Philadelphia suburbs on the national advisory board of the Union of Concerned Scientists. “It seems to me on their face these two enterprises should be immediately dismissed and stricken from the shortlist.”
Other speakers like Susan Saxe were more blunt with their concerns.
“We will fight, I’m not saying this literally, but there will be trench warfare for as long as it takes in this city to turn this thing around,” she said.
Port authority Executive Director Jamie McDermott tried to assure the crowd that the evaluation process would be transparent and fair, and hold each developer to high environmental standards.
“I can promise you this: we are going to do what’s in the best interest of Philadelphia, its citizens and the port of Philadelphia,” he said, adding later that the authority had met previously with representatives from Green Justice Philly to hear their concerns.
Each developer will also be required to submit an environmental master plan.
“We do hold people accountable for their environmental actions,” said Greg Iannarelli, chief counsel for the authority.
The Philadelphia Regional Port Authority board will decide which proposal gets the green light before the end of the year. Construction is expected to begin in 2017.