Megan Holleran stands by a sign on her family's land. The Hollerans lost their court battle to save their maple trees from eminent domain seizure. The trees are being cut to make way for the new Constitution Pipeline.

Megan Holleran lost the latest round of her long-running battle with the natural gas industry on Tuesday when men with chain saws began to fell trees on her family’s property to make way for an interstate pipeline.
The felling crew took down about one and a half acres of trees on the 23-acre Susquehanna County lot, and were expected to cut about the same amount again Wednesday in preparation for construction of the 124-mile Constitution Pipeline that would carry natural gas from Pennsylvania’s Marcellus Shale into New York State.
When the clearance is complete, it will have stripped about 90 percent of the trees from which Holleran and her family harvest maple syrup in a commercial operation that is now destroyed, she said.
The pipeline’s builders, led by the Williams Companies, won court permission about a year ago to take some of the family’s land under eminent domain, a legal mechanism that is being pursued by other pipeline companies as they begin a massive build-out of Pennsylvania’s natural gas pipeline infrastructure.
Landowners like the Hollerans are rejecting offers of compensation by pipeline builders who in some cases are going to court to seek eminent domain over the land.
Holleran said her family, which has owned the property since the 1950s, has urged Williams to find a different route for the pipeline, perhaps even burying it underground, since it was first proposed about five years ago, but that Williams has insisted on the current route.
Tom Droege, a spokesman for Williams, said the company has made changes to “more than half” of the route, including the Hollerans’ property, as a result of feedback from stakeholders.
At the Holleran property, the company moved the route to the western edge in order to “confine impacts,” he said. The company also considered a request from the family to move the line to an adjacent property to the west but that would have involved crossing a quarry which would have created “constructability challenges,” Droege said.
Holleran accused Williams of abusing eminent domain on the grounds that the gas to be carried by the new pipeline would be exported to Canada and Europe and so could not be for the public benefit.

An armed U.S. Marshall on his way to accompany two tree cutters at the Holleran property on Tuesday, March 1 2016. The Williams Company says a federal judge ordered the heavy police presence.

“Eminent domain is supposed to work to benefit the people it’s impacting, and we will not benefit from this pipeline,” Holleran told StateImpact, as chain saws roared and trees fell a few hundred yards away. “The usage of eminent domain in this case to take land from people who didn’t want to give it to them is more of an abuse of the power.”
Droege argued that the Constitution Pipeline, the first to directly link the Marcellus Shale with markets in New York and New England, was determined to be in the public interest by the Federal Energy Regulatory Commission after an extensive regulatory review.
“The project is designed to connect natural gas supplies to communities in the northeastern U.S. so they can enjoy the benefits of this cost-effective resource by next winter,” he said.
At the isolated property in New Milford Township about 30 miles north of Scranton, Holleran and her family were joined by about 20 protestors who were ordered by a federal judge to stay at least 150 feet away from a right-of-way where the felling crew was working. Protestors painted American flags on the trunks of some trees amid handwritten signs such as “No Eminent Domain for Corporate Gain” and “Sap Lines Not Pipelines.”
The tree crew was accompanied by at least three U.S. Marshals who were armed with semi-automatic weapons and pistols, and who wore bulletproof vests.
Holleran, whose aunt and uncle live a few hundred feet from where the trees were cut, said the presence of heavily armed men on her property during the tree cutting was a heavy-handed gesture which undermines Williams’s claim that it treats landowners fairly.
“Williams must be a lot more terrified of my words that I have given them reason to be,” she said. “It shows just how unreasonable they can be; I don’t think that bringing in half a dozen marshals with bullet-proof vests and assault weapons is treating landowners fairly.”
Droege, the Williams spokesman, said the decision to have armed marshals at the site was made by a federal judge, and not by the company. “The top priority is ensuring these activities are conducted safely and efficiently,” he wrote in an email. 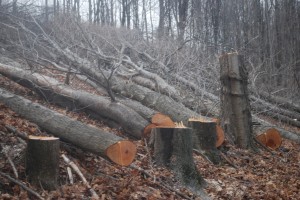 Fallen trees on the Holleran property after cutting on Tuesday. The trees were cut to make way for the Constitution Pipeline project.

The protesters included Elliott Adams, a forester from Sharon Springs, NY, who lives near the proposed pipeline route in that state, and said he had come to support the Hollerans because he said the eminent domain law has been misused in their case.
“They took land by eminent domain which is meant to be for the public good we know that exportation of gas is not for the public good,” Adams said.
He said New York State has not issued all necessary permits for the pipeline, and that he would continue to urge Gov. Andrew Cuomo to withhold final permitting.
On Feb. 10, a tree-cutting crew arrived at the property, accompanied by Pennsylvania state troopers, but left without starting work after the police said they did not have the authority to enforce a felling operation.
The work was then restarted by a federal judge in Scranton who authorized law-enforcement officers to arrest anyone who tried to stop the tree cutting, and said that anyone who did so could be held in contempt of court.
Holleran said the company had made “several” offers of compensation for the value of the wood rather than for the business that she said is being destroyed by the tree removal. But the family is not interested in any compensation because it wants to be able to enjoy its land as it has done for three generations.
“We would reject any offer,” she said. “We have been very clear from the beginning that we don’t want this pipeline on our land. They are destroying my home. You can’t put this in terms of money; there is no compensation for this.”