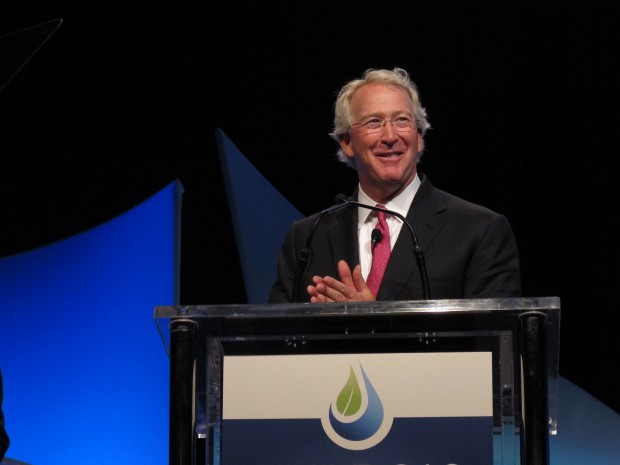 Former Chesapeake Energy CEO and co-founder Aubrey McClendon died in a car wreck Wednesday, less than a day after he was charged with conspiracy.

The former CEO and co-founder of Chesapeake Energy, Aubrey McClendon, died in a one-vehicle crash Wednesday, less than 24 hours after he had been charged with conspiracy following a federal investigation. According to Oklahoma City police, McClendon, 56, was traveling at a high rate of speed when his SUV hit an embankment of a highway overpass Wednesday morning.
From NPR:

A police spokesman said at a news conference Wednesday that McClendon’s car was traveling at a high rate of speed when it collided with an overpass wall and “was engulfed in flames.” The spokesman said no one else was in the car and that police were not initially able to determine whether McClendon was wearing a seatbelt.

In an indictment announced Tuesday the Justice Department accused McClendon of orchestrating a conspiracy between two large, unnamed oil and gas companies to not bid against each other for leases in northwest Oklahoma between 2007 and 2012.
McClendon is often credited with being a pioneer of fracking and leading Chesapeake Energy into the shale gas revolution ahead of many other major companies. Until recently it has been one of the largest and most active drillers in the Marcellus Shale.
“While serving as CEO of a major oil and gas company, the defendant formed and led a conspiracy to suppress prices paid to leaseholders in northwest Oklahoma,” said Assistant Attorney General Bill Baer of the Justice Department’s Antitrust Division in a statement Tuesday. “His actions put company profits ahead of the interests of leaseholders entitled to competitive bids for oil and gas rights on their land.  Executives who abuse their positions as leaders of major corporations to organize criminal activity must be held accountable for their actions.”
As StateImpact Pennsylvania has previously reported, Chesapeake has faced a slew of lawsuits here in the wake of its financial troubles. McClendon left Chesapeake in 2013 and served as head of American Energy Partners. He was charged with violating the Sherman Antitrust Act.
“I have been singled out as the only person in the oil and gas industry in over 110 years since the Sherman Act became law to have been accused of this crime in relation to joint bidding on leasehold,” McClendon said in a statement following the charges. “Anyone who knows me, my business record and the industry in which I have worked for 35 years, knows that I could not be guilty of violating any antitrust laws. I am proud of my track record in this industry, and I will fight to prove my innocence and to clear my name.”
The Justice Department says the indictment is part of an ongoing antitrust investigation “into price fixing, bid rigging and other anticompetitive conduct in the oil and natural gas industry.”
Cheseapeake spokesman Gordon Pennoyer said the company does not expect to face any criminal prosecution or fines related to McClendon’s indictment.
“Chesapeake has been actively cooperating for some time with a criminal antitrust investigation by the Department of Justice regarding past land leasing practices and has received conditional leniency under the Antitrust Division’s Leniency Program,” Pennoyer said in an email. “Chesapeake has taken significant steps to address legacy issues and enhance legal and regulatory compliance throughout the organization.”
Note: This story has been updated with information about McClendon’s death