Ray Kemble of Dimock, displays a jug of what he identifies as his contaminated well water in this August 2013 file photo. The EPA included Dimock as a case study in its draft fracking report.

The Environmental Protection Agency’s Scientific Advisory Board has raised questions about the agency’s landmark study on how fracking impacts water quality. In it’s draft peer review of the agency’s study, published Thursday, the advisory board raised concerns about “clarity and adequacy of support for several major findings.”
One of the more controversial aspects of the EPA’s draft report, released in June 2015, was the conclusion that fracking, also known as hydraulic fracturing, did not result in “widespread” impacts on drinking water. That conclusion drew criticism from environmentalists, and praise from the industry.
Speaking to reporters on the day of the release, the EPA’s science advisor Thomas A. Burke said “based upon available scientific information, we found that hydraulic fracturing activities in the United States are carried out in a way that has not led to widespread systemic impacts on drinking water sources.”
Burke said the number of impacts was low compared to the number of fracked oil and gas wells.
But the Science Advisory Board’s Hydraulic Fracturing Research Advisory Panel, which wrote a letter to accompany the peer review of the original report, says that statement is both ambiguous and inconsistent with “the uncertainties and data limitations” detailed within the EPA’s fracking report. The 30-member peer-review panel recommends the EPA rewrite the report to include explanations of those limitations.
The SAB points out that local impacts can be “severe” and the agency should do a better job explaining to the general public gaps in the data as well as the status of the investigations in high profile places like Dimock, as well as Pavilion, Wyoming and Parker County, Texas.
The EPA said in an email the agency is “very interested” in the SAB’s feedback as well as public input.
“The agency uses robust peer review to ensure the integrity of our scientific products,” wrote EPA press secretary Melissa Harrison.  “We will use the comments from the SAB, along with the comments from members of the public, to evaluate how to augment and revise the draft assessment.” 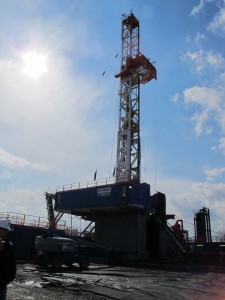 A Cabot Oil and Gas well site in Susquehanna County.

Harrison said the EPA’s updated fracking report will include scientific research published since the draft report, and expects to release a final report sometime this year. She reiterated that the number of known water impacts was small compared to the number of wells drilled and fracked nationwide, but acknowledged the lack of data and research.
“The identification of impacts on drinking water resources may be limited due to: the existence of few systematic studies or monitoring, the short time course of existing studies, the presence of one or more other potential causes, restricted information that is unavailable in the public domain, and/or a true absence of effects,” wrote Harrison.
The EPA’s report looked at the hydrologic cycle of water related to the entire unconventional gas drilling process, including water withdrawals, well completion, and waste water treatment, recycling, and disposal.
Technically, fracking is just one limited stage of the drilling process, but the study also found problems and risks associated with well integrity, subsurface migration of natural gas, and poorly treated wastewater and wastewater spills.
The SAB’s panel says the report should do a better job explaining the risks associated with these incidents. It also makes recommendations toxicological information on more chemicals involved in the process.
Dr. David Dzombak, a Carnegie Mellon University engineering professor who chairs the hydraulic fracturing panel, said the document published Thursday is subject to change, and won’t be finalized until the spring. “We’re not done yet, it’s a draft,” he told StateImpact Pennsylvania.
Asked why the document was made public in draft form, Dzombak said: “All of our deliberations are in the open.”
Asked to characterize the conclusions in the draft so far, Dzombak said it is both supportive and critical of different parts of the EPA’s hydraulic fracturing report.
“It’s a very large report touching all stages of what the agency calls the hydraulic fracturing life cycle,” he said. “Our review is very supportive and commends the office of research and development in a number of areas. In some areas there are recommendations for modifications. There’s a range of advice.”
The SAB will hold public teleconferences February 1 and 2. When the peer-review document is finalized, it will be further reviewed by the Chartered SAB, which Dzombak described as “kind of an executive committee.”
It’s up to the EPA whether or not to accept the SAB recommendations.