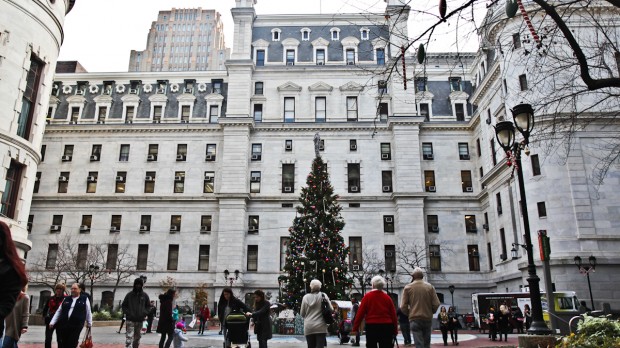 Christmas shoppers enjoy the warm weather at Philadelphia's City Hall. Compared to other East Coast cities like New York, Boston and Miami, Philadelphia will be in a much better position when it comes to sea level rise. Some say that represents an opportunity for the city to attract investment and people.

If the oceans rise as predicted, huge swaths of Boston, New York and Miami will be under water by the end of this century. Compared to those cities, Philadelphia’s future looks great. It’s a good 60 miles from the Atlantic Ocean. That’s good news for most residents.

And some say the city could take advantage of its relatively high-ground position along the East Coast to attract more people and more investment. Chris Crockett is an engineer with the Philadelphia water department. He’s in charge of planning for climate change.

“We could easily take another million people into this city,” said Crockett. “We have the infrastructure, we have the space. This was a city that was designed for 2.5 million people.”

But today, there’s only 1.5 million people. That leaves a lot of empty row houses that could be filled with climate refugees, and a lot of office space for businesses looking for higher ground.

So I was eager to share this good news with my fellow Philadelphians, who typically need an ego boost. The first person I met was Chanel Phillips outside of City Hall in front of the ice rink, where Christmas shoppers were enjoying 65 degree weather.

“Philadelphia, we actually is underated, understated, and unnoticed a lot and we actually do a lot for other cities.”

She reminded me of how the city took in survivors of Hurricane Katrina back in 2005. She said she thought the city would continue to welcome newcomers.

People like Charlie Mueller, a 23-year-old Americorps volunteer who was having lunch outside with his co-workers.

“Well I mean a lot of young people already live here,” he said.

Mueller grew up in Rochester.

“A lot of young people either live here or Brooklyn, so we might get an edge up on Brooklyn because it’ll be under water.” he said. “We won’t be able to go to Atlantic City anymore so maybe we’ll see some of that business come to Philadelphia, who knows? People will come here. Yeah, definitely if Brooklyn’s underwater I’ll come here. Maybe invest in property.”

If he does invest in property he should heed the example of newly arrived resident Samantha Baker Evens, who moved to Philly with her family after careful examination.

I asked her if sea level rise factored into her decision on where to move.

“It very much did when we bought a house,” said Baker Evens. “We rented for a few years, and last year we bought a house and I was looking at the flood maps, because it was the same time that the predictions that New Jersey was going to lose a chunk of its coast were coming out.”

And those flood maps told her to stay away from areas lining the Delaware river, or Eastwick in Southwest Philadelphia. So she chose Frankford. Baker Evens didn’t think the city’s high elevation was it’s greatest asset for revival. She and her husband Chris said they moved here because it was easy to get around without a car. They want to see the city turn into a hub for green energy.

Not everyone I met thought propping the city up with climate refugees was such a good idea.

Joe Gordon is from Abington. He didn’t see an influx of people as good news at all. 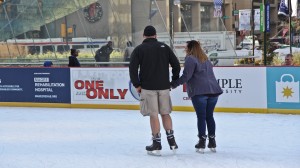 A few skaters at Rothman Rink at Dilworth Park in front of City Hall wore shorts this week.

Gordon says the loss of land in New Jersey would contribute to rising food prices, and perhaps shortages. Climate change impacts, he said, is not good news for Philadelphia.

Deborah Brooks was visiting from Baltimore but says she loves Philadelphia. She’s worried that climate change may force lots of people to look for new homes. And some may have more options than others.

The year thirty thirty-nine is a long way off. But predictions have seas actually rising much sooner.

Still, Darryl Treadwell thought it just might be too far into the future to think about.

“Centuries from now, Philadelphia might be a nice place to be in with climate change,” he said. “You think the water’s gonna rise?”

Yes, tides along the Delaware River could be two feet higher in just 35 years, according to some climate predictions. And although that will lead to more flooding in neighborhoods east of I-95, it’s nothing like what New York City, Boston and Miami face.

And this, some say, could be the perfect opportunity to reverse the city’s second class status and become the industrial powerhouse Philadelphia once was.