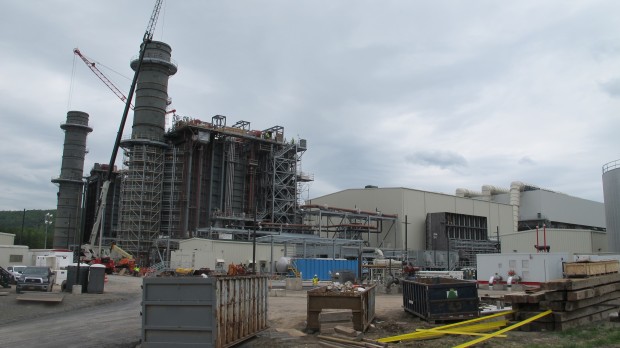 Construction at the Panda natural gas power plant in Bradford County, which is scheduled to come online in 2016.

Pennsylvania Department of Environmental Protection approved the air quality permit for a proposed natural gas power plant in Jessup, Lackawanna County. If built, the plant will be one of the largest natural gas power plants in the state. Chicago based Invenergy, parent company of Lackawanna Energy Center, wants to build a 1500-megawatt plant that will include three gas-powered turbines, three heat recovery steam generators, and a steam turbine.

The DEP says its review process showed emissions from the plant would not violate National Ambient Air Quality Standards.

“The department conducted a thorough and complete review of the application and determined it met all of the air quality regulations”, said Mike Bedrin, Director of the DEP Northeast Regional Office in Wilkes-Barre in a release. “This plant will also have emissions testing, recordkeeping and continuous emission monitoring requirements to assist DEP in monitoring emissions from the facility to help ensure compliance.”

Jessup Borough Council approved a conditional use permit on Tuesday, details of which are outlined here by the Scranton Times-Tribune. The company upped its community benefits agreement offer from $500,000 to $1 million a year.

The proposal is part of a trend in power generation, replacing coal with cheaper natural gas from shale plays like the Marcellus. Natural gas burns cleaner and emits half as much CO2 than coal at the power plant level. The switch to natural gas is also getting encouragement from Obama’s Clean Power Plan, which requires Pennsylvania to cut its carbon emissions by a third. Still, some scientists worry that natural gas brings its own additional climate-warming impacts during the production process. And although cleaner than coal, is not free of air pollutants.

The DEP will also have to sign off on a National Pollutant Discharge Elimination Permit. The agency is holding a public meeting on the project in January.