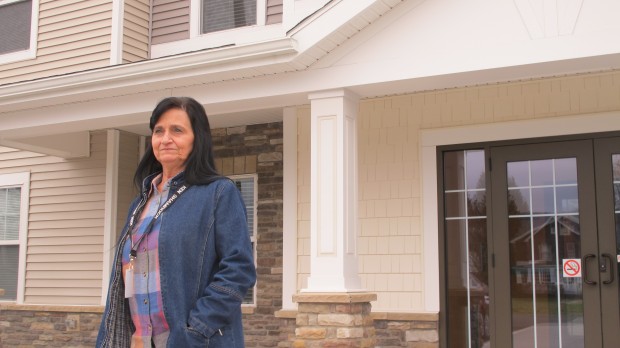 64-year-old Ramona DiMassimo outside her new apartment in Williamsport. The 40 unit complex for people on low incomes was funded through Marcellus Shale impact fees. Although she's happy to have a home, she says many people are still struggling.

The nation’s fracking boom has brought new jobs and wealth to many rural communities. But the abrupt highs and lows of the oil and gas industry can sometimes feel like whiplash for small cities and towns.

When it comes to housing, some people have been left out in the cold as drillers moved in and pushed up prices.

It’s happened here in Pennsylvania and in other shale plays around the country.

For nearly a decade, 64-year-old Ramona DiMassimo lived in a mobile home and had a tough time paying the bills. Sometimes during the winter she couldn’t afford to turn on the heat. She was on medication for anxiety and depression.

“Many mornings, I just didn’t even want to get up,” she says. “Because I just didn’t know how I was gonna get through another day.”

Finally, DiMassimo decided to move. But with a modest income from social security and disability payments, she soon realized she’d been squeezed out of the rental market in her hometown of Williamsport.

“When the gas came in here, everything skyrocketed,” she says.

A few years ago, Williamsport became a major hub of Pennsylvania’s gas drilling boom. The big influx of workers and small supply of housing drove up prices.

Jonathan Williamson chairs the political science department at Lycoming College and serves on Williamsport’s city council. He’s studied the housing issue and says prices have dropped as drilling has slowed down here, but not enough for many seniors and people living on low incomes.

It’s also been difficult to plan around the cyclical nature of the industry—with its booms and busts.

“Housing is kind of a permanent asset for a community—or relatively permanent,” says Williamson. “You can’t just build it and tear it down on the fly.”

In the early days of the boom, Williamson says some people were priced out of their homes by landlords looking for more money.

“They’re in crisis mode when they’re forced out of their home,” he says. “If they were used to paying $500 or $600 for rent, and they can find nothing in that price range at all, what can they do in the short run?”

It was a similar story in the Bakken oil fields of North Dakota. The remote region suddenly saw rental prices start to look more like Manhattan’s.

As oil prices have fallen this year, so have the rents, says Gene Veeder. He’s the economic development director for McKenzie County— in the heart of North Dakota’s drilling boom.

But he says housing prices are still far above what many people would consider normal.

“I’ll give you an example,” says Veeder. “Rates that were probably $3,000 a month are down to $1,500 a month. And there’s still a significant shortage of affordable single family homes.”

“It becomes less interesting to investors to put that kind of money into an area as remote as we are,” he says. “They watch real closely what the occupancy rates are.”

In Pennsylvania, legislators responded in 2012 by passing a law requiring gas companies to pay a fee for each well they drill. The law, which is known as Act 13, requires a portion of those impact fees to be reinvested into affordable housing programs in communities where drilling is occurring.

That’s how Ramona DiMassimo was able to move into a brand new one bedroom apartment earlier this year. It’s part of a 40 unit low-income housing complex in that recently opened in Williamsport.

Since moving in, she’s sleeping better and has stopped taking the medication for anxiety and depression.

Although she’s happy to have her apartment, she knows many people who haven’t been so lucky.

“Everybody’s on a waiting list, and that’s just what it is: a waiting list. You are not guaranteed that you’re ever gonna get in.”

Federal statistics show Pennsylvania still needs more than a quarter million affordable rental homes for people in poverty. Last month the state expanded its affordable housing law beyond drilling areas. Although those communities will still receive gas impact fees, the new law directs money from the future growth of the realty transfer tax back into the residential real estate market in all of the state’s 67 counties.