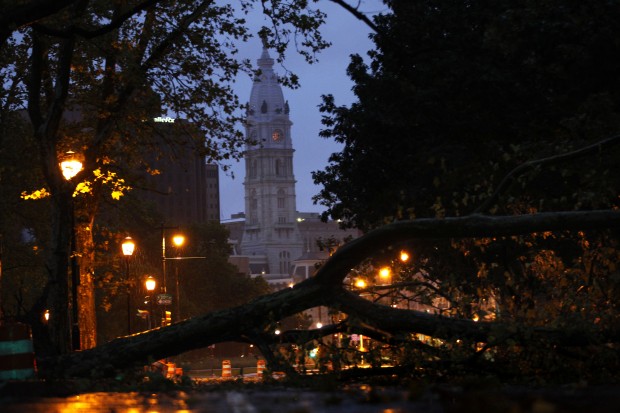 A downed tree blocks a section of the Benjamin Franklin Parkway, as Hurricane Irene made its way along the Eastern Seaboard, Aug. 28, 2011, in Philadelphia. Philadelphia is expected to get hotter in the summer, with wetter winter weather along with severe storms.

While almost 200 nations gather in Paris to hammer out an agreement to cut carbon dioxide emissions, Philadelphia released its own report on how the city needs to adapt to rising seas and a warming Earth. Climate change will continue to bring hotter summers and wetter winters with more severe storms to the Delaware Valley. Much of the precipitation will be heavy, increasing the risk of flooding.

The city will still have four seasons, and maintain the same freeze thaw cycles.

“So that’s really hard, I think, for people to wrap their minds around,” said Gajewski. “Its generally going to get warmer but yet we’re going to have more severe winters, how can those two realities coexist?”

In fact they already do. Philadelphia has experienced its two hottest summers and its two wettest winters on record in just the past five years. Gajewski has been working with all city departments to get them to prepare.

“There’s no certainty about what’s going to happen,” she said. “And we’re making investments and decisions every day as a city government that are going to continue to be with us for decades to come. We’re really trying to figure out how to bring the best available climate science to practioners in Philadelphia to help them make the best informed, forward-looking decisions as they can.”

The city has already implemented projects through the water department to curtail future flooding. Rain gardens and green roofs across the city will help put as much water into the soil as possible, keeping it out of the sewer and drainage systems to prevent flash floods. The streets department has installed concrete pads at busy bus stops in anticipation of hotter temperatures, which cause the asphalt to buckle. And the parks and recreation department is experimenting with new trees and vegetation that will be able to thrive in a new climate, as the less adapted species die out. 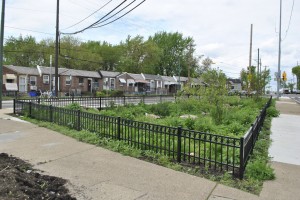 A traffic triangle converted to a rain garden.

One thing the city says it can’t do is spend a lot of money on engineering fixes that could end up sending more carbon dioxide emissions into the atmosphere. Chris Crockett, deputy commissioner of planning for the city’s water department, says the city has opted out of huge infrastructure projects to divert storm water.

And he says, there’s no flexibility with tunnels and holes lined with cement, while the rain gardens can be re-worked and re-imagined.

When it comes to sea level rise, the report shows the greatest impacts will be felt in neighborhoods east of I-95, along the Delaware river, as well as Eastwick in Southwest Philadelphia.