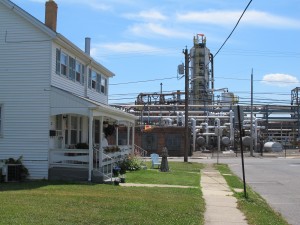 Massive new ships are due to begin carrying refrigerated ethane from Marcus Hook in southeastern Pennsylvania to Europe at the end of the year as Sunoco Logistics completes a plan to pump the gas from western Pennsylvania’s Marcellus Shale to the point where it will have more access to world and local markets.

The Philadelphia-based pipeline and storage company said on Thursday that it expects to begin processing ethane at the Delaware River industrial complex by the end of November and to start selling it there to global, regional and local buyers by the end of the year.

The shipment plan marks a new stage in the development of southeastern Pennsylvania’s so-called energy hub, a proposed complex of pipelines, terminals, refineries and petrochemical plants that boosters say will establish the metropolitan area as a major nexus for the processing and transportation of a range of petroleum products.

Sunoco Logistics’ CEO Michael Hennigan said during a quarterly earnings call that the company is preparing to market the gas at Marcus Hook after pumping it across southern Pennsylvania along the Mariner East 1 pipeline, which is already pumping propane along the route.

“We’re expecting to begin the ethane start-up process by the end of November with the commercial operation stayed by the end of the year and continuing to ramp up into the first quarter,” Hennigan told financial analysts.

As the Marcus Hook terminal becomes fully operational, it will have the capability of loading ethane on to a new generation of tankers, known as Very Large Gas Carriers, that will transport the gas to a port in Norway.

The ships will add economies of scale to the Marcellus operation that has struggled against falling prices this year and has had limited access to markets because of a shortage of pipelines.

It’s cheaper to move ethane to market using large ships and pipelines than it is with smaller ships and trucks or trains, Hennigan said.

“Economies of scale associated with VLGC transportation along with the efficiencies associated with pipeline economics versus truck and rail alternatives will directly benefit … pricing in the liquid-rich shale areas of Marcellus and Utica Basin,” he said.

The lower transportation costs could save as much as 15 cents a gallon, he said.

“You could easily see a $0.15-a-gallon change in the economics just from the VLGC change that occurs,” Hennigan said. “Now, we’ll have to see how the market prices itself out, but I’m giving you like a ballpark number,” he told analysts.

Meanwhile, the company is seeking engineering permits for its planned Mariner East 2 pipeline which would carry natural gas liquids along a line adjacent to Mariner 1. Mariner East 2 is designed to carry 275,000 barrels a day when it begins operations in late 2016, and could be upgraded to carry 450,000 barrels if there is sufficient demand, Hennigan said.

He said the company is considering building a second pipeline in the Mariner East 2 project, and recently launched an “open season” for bids by producers to take capacity. If all the planned lines are built, they would give producers local and global market access to 800,000 barrels a day of liquids from the Marcellus and Utica Shales.

Proximity to the lucrative northeastern market, especially during the heating season, and to the European market via the Atlantic Ocean, gives the Marcus Hook complex an advantage over the GulfCoast – a more distant area from both markets — as a shipment point for petroleum products, Hennigan said.

But the company is encountering resistance at some places along its 350-mile route from landowners who have refused Sunoco’s offers of compensation for building the line on their land, and are in some cases fighting the company’s eminent domain actions in court. Some affected landowners and their lawyers are due to meet in Carlisle on Saturday in what organizers say is the first gathering of residents along the entire pipeline route.

And environmentalists say the new line would endanger dozens of streams and wetlands along the route. The environmental group Delaware Riverkeeper Network said it will oppose the project at a meeting on November 10 of the Delaware River Basin Commission, an interstate regulator that oversees water quality and supply in the region.

Critics say the Philadelphia energy hub represents a promotion of fossil fuel use at a time that governments and climate campaigners are seeking to increase the use of low-emissions energy sources.