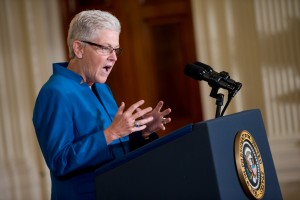 Environmental Protection Agency (EPA) Administrator Gina McCarthy said the addition of natural gas processing plants to the reporting requirements of the Toxics Release Inventory would add significantly to public information on the issue.

The U.S. Environmental Protection Agency will propose a rule that would require natural gas processing plants to report their emissions of toxic chemicals such as benzene, formaldehyde and hexane.

The decision followed a request in 2012 by the Environmental Integrity Project and 17 other environmental groups for the EPA to include the oil & gas industry to the reporting requirements of the Toxics Release Inventory, a public database to which most other industries have had to report for many years.

The EPA estimates that more than half of the approximately 550 U.S. natural gas processing plants meet a threshold for emitting toxic air and water pollutants that would be covered by the TRI.

“As a result of these considerations, the Agency agrees with the portion of the Petition asking that EPA commence the rulemaking process to propose adding natural gas processing facilities to the scope of TRI,” the EPA said in a letter sent to the Environmental Integrity Project on Monday.

Robert Daguillard, a spokesman for the EPA, said on Tuesday that plants that meet all three TRI reporting criteria will be required to submit annual TRI data to the EPA, and to the state in which the plant is located.

Public reporting of such emissions will allow communities to measure environmental impacts of the plants and motivate energy companies to make reductions, said Adam Kron, an attorney for the Environmental Integrity Project.

“The oil and gas industry releases an enormous amount of toxic pollutants every year, second only to power plants in emissions,” Kron said in a statement. “With this decision, EPA is taking an important step in the right direction.”

In a letter to the environmental groups, EPA Administrator Gina McCarthy said the addition of natural gas processing plants to the TRI would “meaningfully” increase the information available to the public about the plants’ emissions. She said the plants manufacture or process some 25 chemicals that are listed in the registry.

The TRI was established by Congress in 1986 after the Bhopal disaster in India released toxic gases that killed thousands of residents. The registry was designed to inform the public about the release of sometimes carcinogenic chemicals.

Although the addition to the TRI will improve public information, the public should continue to demand full disclosure of emissions from the shale gas industry, said George Jugovic, Jr., chief counsel at PennFuture. “It is important that the public continue to demand complete transparency,” he said.