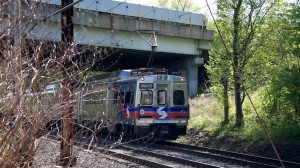 SEPTA's board approved plans to use natural gas to power Philadelphia's commuter lines.

The estimated $26.8 million project would be “budget neutral” for SEPTA because it will be financed through the Pennsylvania Guaranteed Energy Savings Act, which encourages efficiency upgrades that pay for themselves over time through cost savings. The plant would have to be built by a certified energy savings company, which provides both the capital for the project, as well as an energy cost saving guarantee.

SEPTA has chosen the Massachusetts based company Noresco, to conduct an audit to make sure the gas plant would pay for itself over time with lower energy costs. The planned gas plant would provide base level power, and use the excess heat generated for three nearby facilities. The plant would also help make the transit agency self-sufficient in case of power outages.

“Importantly, the CHP Plant would provide SEPTA with a resilient source of power in the event of a regional electrical grid outage, allowing trains to continue to operate to transport passengers safely to their destinations, even during a blackout.”

The SEPTA board also approved $18.2 million to upgrade facilities and railcars in an effort to make them more energy efficient. The agency says the upgrades will save $26 million in energy costs over 17 years.

Amid budget battle, royalty issue comes to the surface