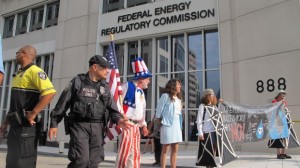 Protesters were arrested for blocking a public passageway outside the Washington D.C. headquarters of the Federal Energy Regulatory Commission in July, 2014.

Environmental lawyers say they may have to craft new legal strategies to effectively challenge interstate pipeline construction decisions by the Federal Energy Regulatory Commission. Activists continue to accuse FERC of acting as a rubber stamp when it comes to approving pipeline projects. They argue the agency does not do an adequate environmental review that includes regional and indirect impacts associated with natural gas production, and the cumulative effect of thousands of miles of new pipelines. FERC denies this, repeatedly saying their environmental reviews are rigorous and any impacts from natural gas production are not the result of pipeline construction.

Either way, some environmental attorneys say the deck is stacked against them when challenging FERC’s decisions. Although the federal Natural Gas Act requires the agency to issue a decision on appeals within 30 days, FERC can extend the deadline indefinitely by issuing what is called a “tolling order.”  In some recent cases, FERC issued its decision after the pipes were already in the ground with the gas flowing.

In the Cove Point LNG case, FERC rejected environmental appeals before construction was completed. Construction has continued while another environmental law firm, Earthjustice, has appealed the decision to the federal appeals court in D.C., which is still pending. 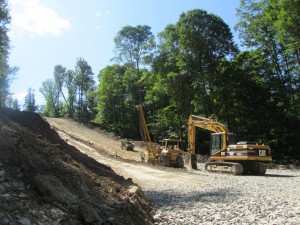 But that hasn’t been the case with several pipeline projects. FERC approved Columbia’s pipeline upgrade in December, 2014. Construction soon got underway, and included two compressor stations and two sections of pipe in Chester County, Pa., and Gloucester County, NJ.

Talbott filed a request for rehearing on January 20, 2015, essentially an appeal to FERC’s decision. Meanwhile, construction on the pipeline was allowed to go forward. The Clean Air Council also appealed based on a number of environmental issues with pipeline construction, air quality surrounding new compressor stations, and the impact of increased natural gas production. The Clean Air Council also filed a stay on construction.

Hearing nothing from FERC after several months while pipeline construction went forward, the Clean Air Council sought relief from the federal court in Philadelphia. It has yet to hear from that court.

On October 2, Columbia Gas Transmission announced the expansion was completed and online. A week and a half later, FERC issued its order denying the appeals by both the Allegheny Defense Project and Clean Air Council, as well as the stay of construction sought by the Clean Air Council.

In the decision FERC explained why the agency does not consider gas production relevant to an environmental review.

That denial was not a surprise to either party. But it is essentially a ticket for the appellant, in this case the Allegheny Defense Project or the Clean Air Council, to take their case up to the federal appeals courts. Talbott says it’s too late.

“When the pipe is in the ground, is the court going to order a pipe to be ripped up out of the ground?” asked Talbott. “No. Their strategy is to [allow pipeline construction] nonstop to facilitate fracking. There’s no downside as far as they’re concerned.”

Talbott says FERC is abusing its power and this is in effect a denial of due process.

“The point of due process is to provide a fair hearing before a deprivation occurs, not after,” wrote Talbott in an email.  “If FERC is still “reviewing the record” during rehearing, it should not be allowing construction that impacts landowners and the environment to occur.  What possible legal or factual basis does FERC have for emphasizing the applicant’s “need” to start construction over the requirements of due process?”

But FERC says it often needs more than 30 days to assess an appeal, especially those that are very complex. And it says tolling orders are not based on the merits of the case, but insures the Commission has enough time to address the issues brought up in the appeal. FERC spokeswoman Tamara Young-Allen says decisions made after a project is completed do not deny due process.

“Due process is provided and is not precluded by the fact that a project has been constructed,” wrote Young-Allen in an email.  “FERC issues an order, then, if challenged, issues, after thoroughly reviewing the record, an Order on Rehearing.  If an Order on Rehearing or a court decision requires a change to what the company has already done, the company must make the change.”

Young-Allen says even if that change means ripping up an installed pipeline, that’s what a company would have to do should FERC reverse its decision. But environmental lawyers say that’s unlikely.

Augusta Wilson is a staff attorney with the Clean Air Council, which sought a stay of construction with FERC on the Columbia Gas Transmission project in April. FERC’s rejection of that request came 12 days after the new pipeline started transporting natural gas.

“It leaves people who want to appeal pipeline projects with limited remedies,” said Wilson. “In almost every instance, when [FERC] gets the request, instead of issuing a substantive response within 30 days, they issue a tolling order. So they think about it indefinitely.”

Wilson says despite the rejection and the completed project, she’s still considering whether or not to take the issue up to the federal court, which could provide some relief.

“It’s possible there could be some mitigation put in place,” said Wilson. “There are certain aspects of FERC’s decision where we could argue there needs to be stronger environmental protections put in place.”

In August, Wilson had sought the intervention of the 3rd circuit court of appeals to push FERC to make a decision on the Eastside Expansion case. That court has not yet responded to the Council’s request. But she says the larger issue of FERC using tolling orders to delay decisions on appeals should be brought before the federal courts.

“We anticipate we will encounter this situation again,” said Wilson. “Given the fact that the projects continue to be built and by the time FERC takes action, they are already operating. That is essentially a rejection [of the appeal].”

But several federal appeals courts have ruled that tolling orders, which FERC uses to delay decisions on appeals, are constitutional and do not deny due process.

“There’s at least four circuit courts that have said what FERC is doing is fine,” said Carolyn Elefant, an attorney who represents landowners, municipalities and other groups impacted by pipelines. “The agency can take a long time to make a decision. Then the parties will ask for a stay [of construction]. And FERC always says no, there’s no irreparable harm. Basically what the court says is that if you can fix the problem through money it’s not irreparable harm.”

Elefant says as long as there is some kind of remedy, then there is no denial of due process.

“Even if it’s not a due process violation, it is ridiculous and it is unfair,” said Elefant. “There should be some kind of limit on how much time FERC takes to resolve these cases.”

But she says that could only happen if Congress changes the Natural Gas Act, or FERC decides to speed up the process on its own. Elefant says in her experience FERC has been taking longer responding to appeals. And the agency does have the incentive to take a long time making sure their decisions will stand up to scrutiny by the federal courts.

“It’s hard for me to say this is intentional,” said Elefant. “I don’t think FERC is racing to put [these cases] up on the top of the pile.”

But a case challenged by the Delaware Riverkeeper did prevail in federal court last year, even after the project was built. It’s unclear what remedy, if any, FERC will pursue, but the D.C. circuit court found FERC violated the National Environmental Policy Act by not looking at the cumulative impacts of several sections of new pipeline.

“In the past, groups never had the resources and [landowners] weren’t getting involved as much,” said Elefant. “Now, environmental groups are much better organized, landowners are much more organized. And FERC wants to save their order. They want to bolster it.”

Talbott, from the Allegheny Defense Project, thinks something more sinister is at work. He says FERC is a captured agency, putting forth an agenda to get as many pipelines in the ground no matter what the cumulative impacts are to a region. And he links this to President Obama’s effort to cut carbon emissions from power plants.

“It’s all part of the Clean Power Plan that the EPA approved,” said Talbott. “Part of that involves a huge transition away from coal to natural gas. And if we’re doing that we are committing ourselves to fracking for decades. And we should have an honest conversation about that. FERC does not want to address the impacts. FERC ignores the broader cumulative effect of what happens all over the place.”