Philadelphia has much to lose if drastic global carbon reductions aren’t made, study says 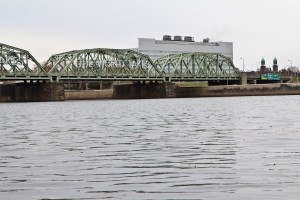 Tidal sections of the Delaware river could flood large areas of Philadelphia and other Pennsylvania cities in the future unless policymakers make radical cuts in global carbon emissions, a new study says.

Philadelphia and some other cities along the tidal Delaware River in southeastern Pennsylvania could avoid the worst effects of long-term sea-level rise if global carbon emissions are radically reduced, according to a study published Monday in the Proceedings of the National Academy of Sciences.

The paper from Climate Central, a Princeton, NJ-based research organization, found that Philadelphia is among the 10 U.S. cities that has the most to gain by big cuts in greenhouse gases if they were implemented globally.

The study found that some 156,000 people, or about 10 percent of the city’s population, based on the 2010 census, are living in areas that would be below the high-tide mark at some point in the next century if carbon emissions remain at about current levels.

That number would be reduced by more than 90 percent to about 14,000 if “massive and prolonged” carbon emission cuts were made, a policy that would reduce global warming, slow the melting of polar ice sheets and mitigate the expansion of ocean waters that would come with higher global temperatures, the paper said.

The difference between the two population levels under the two carbon scenarios – about 142,000 – is the eighth-highest in the country, and suggests that Philadelphia would be among the cities with the most to lose if carbon reductions weren’t carried out globally, the researchers say. The difference between the two carbon levels is exceeded only by a handful of other low-lying cities including Miami, New York, and Virginia Beach. But a coastal city like Boston is not in the top ten.

“Boston has a severe problem even in the best case scenario,” said Ben Strauss, Vice President for Sea Level and Climate Impacts at Climate Central. “Philadelphia has a really big problem under the worst-case scenario but a very small problem under the best case scenario. That’s why the stakes for Philadelphia are higher than almost any other American city in the difference between what happens if we cut carbon emissions and we don’t.” 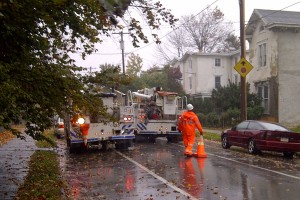 Other Pennsylvania population centers that could reduce the impact of widespread flooding, allowing thousands of people to stay in their homes, include the riverside communities of Bristol, Croydon and Chester, the report said.

In Bristol, 8,382 of the town’s 9,726 people live in areas that would be below the high-tide line if emissions remain unchecked, contrasting with only 242 people who would be flooded out under an extreme reduction of emissions. And in Chester, some 5,700 people would be affected if emissions are not cut, the report said.

Climate Central, which has previously produced a series of online tools allowing users to anticipate the local effects of climate change, projected the population of hundreds of cities nationwide that would be displaced by rising sea levels after 2100 under four different carbon-emission scenarios.

The carbon scenarios, called Representative Concentration Pathways (RCP), are given numerical values that represent policies ranging from “extreme” cuts to “unchecked pollution”. The latter projection, RCP 8.5, would result in 3.3 degrees C of warming (based on pre-industrial levels) and eventually in 7.1 meters of sea-level rise (SLR), both at some point beyond the end of the 21st century. The long-term SLR projection is about seven times the consensus estimate for the global increase by 2100.

Even “extreme” carbon cuts, called RCP 2.6, would result in long-term “locked in” global sea-level rise of 2.4 meters over the long term because of historic and current carbon emissions, the study said.

Such radical cuts could consist of a rapid switch to renewable fuels and/or increased use of nuclear power, Strauss said. “It implies a massive energy transition on the scale of an industrial revolution,” he said.

The study does not specify a time frame to its long-term inundation scenarios because of uncertainty about when, or by how much, the enormous West Antarctic Ice Sheet will melt, a process that some experts say could add as much as 4.6 meters, or 14 feet, to the global ocean level.

“It is easier to estimate how much ice will eventually melt from a certain amount of warming, than how quickly it will melt, which involves more unknowns,” Strauss told StateImpact.

Michael Mann, director of the Earth System Science Center at Penn State University, said there are already some indications that the West Antarctic ice sheet is “doomed” and, given additional projected global warming, that could create 12 to 14 feet of sea-level rise over time.

“Just how quickly this might happen, however – are we talking 500 years? 200 years? — is very much uncertain,” Mann said.

He called the new paper a “useful contribution” to the literature on climate change, and said it quantifies the future impacts of sea-level rise, including under “business-as-usual policies of fossil fuel burning.”

But Mann argued that the new study might actually understate the additional flooding risk from higher sea-level rise because it does not explicitly anticipate bigger hurricanes resulting from climate change. A storm of the magnitude of Sandy, previously expected to hit only once in 3,000 years, can now be expected once a century, he said.

The report was issued some two months before the start of global climate talks in Paris which will seek to establish international binding limits on carbon emissions in an attempt to mitigate climate change.

“We have been working and hoping to get this research out ahead of the global climate talks in Paris because we believe it holds useful information for leaders to consider as they make their carbon choices and negotiate,” said Strauss.

The paper argues that the window of opportunity to limit global warming to about an average of 2 degrees Fahrenheit from current temperatures “appears to be closing” but that an analysis of the costs and benefits of different carbon-control scenarios may help formulate policy.

“The results offer a new way to compare different emissions scenarios or policies and suggest that the long-term viability of hundreds of coastal municipalities and land currently inhabited by tens of millions of persons hang in the balance,” the paper says.

Although the projections suggest that sharp carbon emissions could help cities like Philadelphia prevent the worst of future flooding, the report says that carbon emissions to date have already locked in some degree of inundation.

“Historic carbon emissions appear already to have put in motion long-term SLR [sea level rise] that will endanger the continuity and legacy of hundreds more municipalities, and so long as emissions continue, the tally will continually increase,” it says.

And Strauss cautioned that the report is not suggesting sea-level rise can be avoided altogether. “The best-case scenario is bad but it is a great deal better than the worst-case scenario,” he said.