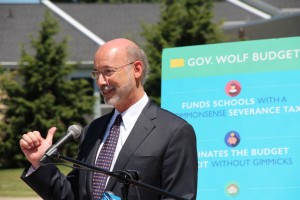 Gov. Tom Wolf has had a hard time selling new taxes, including a severance tax on natural gas, to the legislature.

Seeking an end to the state’s three month-old budget stalemate, Pennsylvania Governor Tom Wolf sent the GOP-controlled legislature a revised tax plan that lowers his ‘ask’ on a severance tax for the natural gas industry. But his political rivals say it’ll cost the industry just as much as his old plan, if not more.

The new proposal would drop the natural gas severance tax Wolf has proposed from 5 percent to 3.5 percent, and keep a proposed additional fee of 4.7 cents per thousand cubic feet (mcf) of natural gas.

The new plan brings back something Wolf, a Democrat, had taken out of his initial proposal: the state’s per-well “impact fee”, which brings in around $225 million a year currently and gets distributed largely to counties and townships where drilling takes place. Under Wolf’s original plan, the state would have set aside $225 million per year from the gas severance tax and distributed it the same way it does now. But instead of getting the money through a flat fee on each well, it would have raised the revenue by taxing the gas itself. Wolf’s updated plan now keeps the original impact fee and adds a severance tax on top, albeit a lower one.

Jeff Sheridan, Wolf’s spokesman, said the new 3.5 percent severance tax would bring in $389 million in revenue to the state in 2016-2017, the first full year it would be implemented.

The severance tax is part of a suite of proposals Wolf is making to fix the budget stalemate. The GOP-controlled legislature passed a budget June 30, but Wolf vetoed it. His latest proposal includes a higher personal income tax and property tax relief for seniors and disabled people.

“We need to make sure oil and gas companies pay their fair share so we can restore the drastic cuts made to education,” Wolf said, in a statement. “Seniors and disabled households desperately need relief from skyrocketing property taxes that resulted from underfunding education.”

Pennsylvania is the only major gas-producing state without a severance tax. Instead, it has an Impact Fee, signed into law in 2012 under Gov. Tom Corbett. The state’s Independent Fiscal Office earlier this year found the state had the lowest effective tax rate on natural gas and that Wolf’s 5 percent proposal would “likely move Pennsylvania from one of the lowest severance tax states to the highest tax state, relative to other major gas producing states.”

Republicans and business groups, who oppose a severance tax, say the changes announced Tuesday don’t amount to much.

“It would be the highest (severance tax) in the nation,” said House GOP spokesman Stephen Miskin. GOP members said that by keeping the impact fee, Wolf’s plan might end up costing the natural gas industry more than his initial plan, announced in March, to tax the industry at 5 percent.

“We remain strongly opposed to a severance tax, as do a variety of groups representing a wide variety of industries,” said Kevin Sunday, spokesman for the Pennsylvania Chamber of Business and Industry. On Monday, 16 groups co-signed a letter with the organization opposing the tax. ‘

A vote on the plan is expected Tuesday, but it’s unclear whether Wolf has the votes he needs to pass it.