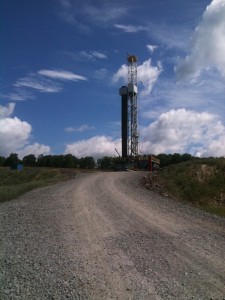 Natural gas from wells like this one in northeastern PA will cost less at the retail level this winter, the federal government says.

U.S. homeowners can expect to pay less to heat their homes this winter because of lower prices for natural gas, heating oil, propane and electricity, and because of expected lower consumption as a result of a milder winter, the U.S. Energy Information Administration said on Tuesday.

In its annual Winter Fuels Outlook, covering October to March, the EIA said the Northeast will be 13% warmer than last year, resulting in lower demand for the main heating fuels. The Midwest will be 11% warmer than last year, while temperatures in the South will be on average 8% higher, according to forecasts from the National Oceanographic and Atmospheric Administration.

Residents who heat their homes with natural gas will pay a national average of $64, or 10 percent, less this year as a result of a 6% drop in consumption and a 4% decline in residential gas prices since last year, the EIA said.

“Natural gas supplies should be adequate to meet demand this winter, as average household natural gas consumption during the heating season is expected to be the lowest in four years,” said EIA Administrator Adam Sieminski, in a statement.

Natural gas futures prices ended at $2.45 per million BTUs on Monday, about $1.60 lower than a year ago, the EIA said, amid abundant inventories.

Meanwhile, the average cost of heating oil for the winter will see the biggest decline of the major heating fuels, dropping 25% to $459 on average, because of an 11% decline in consumption and a 15% fall in prices, the agency said. The price of electricity for heating will fall by only 3% because its widespread use for appliances makes it less sensitive to fluctuating winter demand.

The agency also forecast that U.S. crude oil production will continue to fall through next August and then begin to recover in late 2016. U.S. crude output dropped by 120,000 barrels a day in September from August, the EIA said.

How the Trans-Pacific Partnership could impact LNG exports