EPA sets tougher ozone standard, but not tough enough for some greens 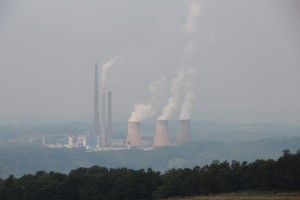 The ozone standard could effect power plants, like Homer City in Indiana, Pa.

After years of delay and court battles, the Obama administration released a final update to its regulation on ground-level ozone, or smog Thursday. The EPA set the standard at 70 parts per billion (ppb) of ozone, an irritant that can exacerbate asthma and other heart and lung conditions. The new rule is a reduction from the current standard of 75 ppb, set in 2008 under President George W. Bush.

“Put simply – ozone pollution means it hurts to breathe for those most vulnerable; our kids, our elderly and those suffering from heart and lung ailments,” said EPA Administrator Gina McCarthy.

The key question for industry and environmental groups in advance of Thursday’s widely-anticipated announcement was how low the EPA would go in revising the standard. Since the mid 2000s, the EPA’s own scientists had recommended a level of between 60 and 70 ppb. Last year, the agency proposed a range from 65 to 70 ppb. So setting the limit at the upper — or least stringent — end of that range disappointed some environmental groups.

“The EPA failed to protect our communities from dangerous levels of smog pollution,” said Tom Schuster, of the Pennsylvania Sierra Club’s Beyond Coal campaign.

“While we acknowledge that the new rule is stronger than the existing one, choosing the weakest option will continue to harm Pennsylvanians who suffer from asthma attacks and other related respiratory ailments.”

The decision means industry in more polluted areas will have to install costly pollution control devices to cut down on emissions. But industrial groups breathed a sigh of relief by not having to comply with an even stricter standard.

“We know that this regulation could have been worse, but it still feels like a punch in the gut,” said Tom Riordan from the National Association of Manufacturers.

Even though industry’s “worst-case” scenario of a 60 or 65 ppb standard was avoided, business groups said the new standard would still bring hardship.

American Petroleum Institute CEO Jack Gerard called the new standard ‘costly and unnecessary’ and called on Congress to block it.

“A lower standard for ozone, even at 70 ppb, will present a significant economic challenge to manufacturing and many of our growing industries,” said Kevin Sunday, spokesman for the Pennsylvania Chamber of Business and Industry.

Lowering the threshold to 65 ppb, instead of 70, would have meant 90 percent of the state would not have met the standard.

Sunday said the current standard of 75 ppb was working to lower air pollution in Pennsylvania. Emissions of the chemicals that go into making ozone–nitrogen oxides and volatile organic compounds–were down by 29 percent and 21 percent respectively in Pennsylvania since 2008, he said.

Sunday said the new standard would likely impose pollution reduction costs on a wide variety of industries, from power plants and refineries to steel and aluminum manufacturers. The standards may impact the type of gasoline that can be sold in more polluted parts of the state, and could hamper the state’s ability to build new highways in Pennsylvania, Sunday said.

“It’s very sweeping in its scope when the EPA brings down the ozone standard–it literally touches almost every corner of the economy.”

As of this year, 122 million Americans live in areas that don’t meet the EPA’s current 75 ppb threshold. That includes millions in Pennsylvania who live in the metropolitan areas of Philadelphia, Pittsburgh, Reading, Allentown and Lancaster.

Rob Altenburg of the environmental group PennFuture said he wasn’t surprised the EPA set its standard at the least stringent value.

“Given the amount of political pressure they’re under, it’s not surprising,” said Altenburg. “They set it at the highest value they had the scientific support for.”

In 2011, EPA considered adopting the new standard, but backed down amid reports that the decision could hurt manufacturing in Midwest states during an election year. Environmental groups sued, and courts ordered the EPA to deliver the new standard by Thursday.