Gas developers urged to be transparent in applications to municipalities 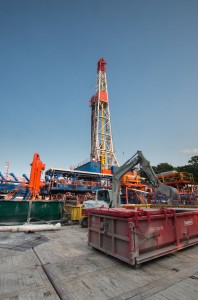 Operators of gas rigs like this one in Tioga County should be fully transparent about their plans when making applications for municipal approval, industry experts say.

Natural gas companies seeking municipalities’ permission to build well pads should disclose every aspect of their plans to residents and local officials and should do so with a respectful approach to local sensitivities, experts said on Thursday.

Attendees at the annual Shale Insight conference, hosted by the Marcellus Shale Coalition trade group, were offered guidance on how to present their plans in a way that would be approved by zoning boards at a time that some are asserting a local right to control oil and gas development.

Panelists at a session on “Community Engagement on Conditional Use Hearings” urged companies to be completely transparent about their plans, to meet with community members and officials in advance of a zoning hearing and to establish a record of their case that can be used as evidence before a judge in any appeal.

More recently, Middlesex Township in Butler County has been sued by opponents of gas development after it sharply increased the amount of township land that is zoned for industry. The plaintiffs argue that the township has violated a constitutional responsibility to zone in a way that protects the health and safety of its residents.

At the Shale Insight session, Thomas Gillespie, director of health, safety and environment for the Williamsport-based natural gas supplier Inflection Energy, said full disclosure of development plans is the best way to calm local fears that he said are often based on fear and misinformation.

Gillespie said he begins the process of seeking local approval by holding a public dinner for everyone living within a mile of the proposed development. Over two hours, he said he will answer questions on every detail of the plans, including the process of fracking.

“The way to build public trust is to be entirely transparent,” he said.

At the public meetings, Gillespie said he argues that well pads mean disruptions such as noise, heavy truck traffic and round-the-clock light only in their construction phase, and that operators restore the sites after wells are drilled and completed.

“Do we come into the community and make a bit of noise and a bit of light at night?” he said. “Yes, but so does building a Wal-Mart or a Sheetz station.”

Thomas Shepstone, a pro-shale gas blogger, urged gas companies to assume that zoning boards have a legitimate concern, to fulfill every requirement of a zoning ordinance and to take a respectful approach to board members.

“They have the ability to distinguish nonsense from truth,” he said.

Asked by panel chair Matt Henderson, public relations manager of Inflection Energy, how to respond to the “fractivist” community, Shepstone said a full explanation of the development will help to defuse opposition.

He also urged developers to highlight the fact that well pads look very different when they are restored.

“The long-term use of the well pad is totally innocuous,” he said. “Let’s separate construction from permanent use.”

In Hepburn Township, Lycoming County, gas developers are invited to a pre-application meeting with zoning officials, giving the company a clear understanding of local concerns before their application is submitted, said Joseph Hamm, chairman of the township’s board of supervisors.

After the application is submitted, the board limits its contact with the company in the interests of preserving impartiality and insists on orderly conduct at the zoning hearing.

“We don’t allow people to jump up and down,” he said.

Hamm said the process has succeeded in being accepted by all sides, and the board’s decisions have never been appealed.

Susan Smith, an attorney who represents applicants before zoning boards, warned that any high-handed attitude on the part of the applicant could backfire.

“If you are not respectful, if you are a bully, you will put their back up,” she said.