Halliburton agrees to pay $18M in back pay for overtime 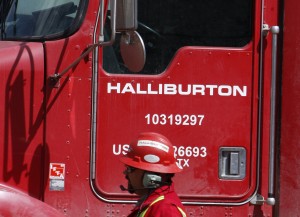 An unidentified worker passes a truck owned by Halliburton at a remote site for natural-gas in Colorado.

The U.S. Department of Labor announced Tuesday it had come to an agreement with the oilfield giant and fracking pioneer Halliburton to pay $18 million for unpaid overtime to more than 1,000 workers in several states around the country, including Pennsylvania.

The Department, in a release, called it “one of the largest recoveries of overtime wages in recent years.”

The agency said its wage and hour division investigated the company “as part of an ongoing, multi-year compliance initiative in the oil and gas industry in the Southwest and Northeast.”

Thirty-nine workers in Pennsylvania are affected by the settlement, and as a group these workers would receive $800,000 in back pay, announced the Department of Labor.

Halliburton spokeswoman Susie McMichael said in an email the company reported the case to the government after finding out about the unpaid overtime in a “self-audit.”

“Halliburton identified a certain number of jobs that were misclassified as exempt,” said McMichael. “The company re-classified the identified positions, and throughout this process, Halliburton has worked earnestly and cooperatively with the U.S. Department of Labor to equitably resolve this situation.”

“The Department of Labor takes very seriously its responsibility to ensure workers receive the wages they have earned,” said U.S. Secretary of Labor Thomas E. Perez. “This settlement will put millions of dollars where they belong — in the pockets of hardworking people and their families. Employers who don’t pay their employees the wages they have earned don’t just hurt their workers, they undercut employers who play by the rules. That’s why we work every day to help level the playing field.”

Halliburton has more than 70,000 employees, and frequently contracts with oil and gas companies to develop wells around the country, including Pennsylvania.

Under federal labor law, certain salaried positions can be classified as executive, administrative, and professional; these are often called “white collar” exemptions and exempt the employer from having to pay overtime to the workers.

“Simply paying an employee a salary does not necessarily mean the employee is not eligible for overtime,” said the Department, in its statement.

Haider Hamoudi, associate professor of law at the University of Pittsburgh, and a contracts law specialist, said the question of who is exempt and who isn’t can be a grey area in many industries.

“In a lot of fields that line is easier to draw–it’s sort of clear who the higher level managerial and professional staff are,” said Hamoudi. “When it comes to oil and gas there’s a lot of people who could be classified in either direction, and the industry has a tendency to classify people in the exempt category.”

Part of the reason for this is that many oil and gas jobs require extensive technical knowledge and training, Hamoudi said.

Pete Winebrake, an attorney with the Philadelphia-area law firm Winebrake and Santillo, which represents workers in wage and overtime rights cases, said this “misclassification” is common in the oil and gas industry.

“This is a very transient workforce where employees are moving around the country and working for many different companies,” Winebrake said. “The whole purpose behind overtime rights laws is to make it really expensive for companies to make employees work more than 40 hours a week. The law is intended to make companies dole out more of these types of high-paying jobs to more workers.”