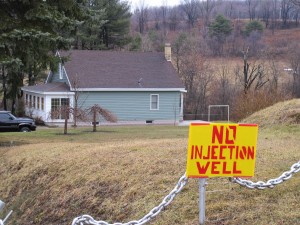 The Pennsylvania Department of Environmental Protection has delayed decisions on controversial deep injection well permits, while waiting for rulings from the federal courts. The siting of the deep injection wells became federal cases after local municipalities passed ordinances to ban the drilling waste disposal wells.

It’s the first time DEP has taken such a position and this move has both injection well opponents and industry lawyers criticizing the agency for shirking its responsibility.

DEP says it does not reflect a change in policy regarding deep injection wells. In Pennsylvania, underground injection well permits are primarily issued by the U.S. Environmental Protection Agency. But the state does have authority over permitting the conversion of former producing wells into drilling waste disposal wells.

Last month, DEP oil and gas director Scott Perry wrote to at least two operators, referring to the ordinances and the current litigation as reasons to postpone decisions on the well sites. In a letter to Pennsylvania General Energy regarding a proposed injection well for Grant Township, Perry says the review is nearly complete.

“However, a conflict between this project and an ordinance adopted by Grant Township entitled Community Bill of Rights Ordinance (Grant Township Ordinance) has been brought to our attention.”

PGE had filed a federal lawsuit to reverse the township’s ban, arguing the ordinance unconstitutionally strips the company of its rights. The case continues to play out in court. 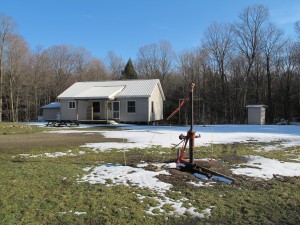 This former gas well in Warren County was permitted by the EPA to be converted to a disposal well despite local opposition.

A similar letter was sent to Seneca Resources regarding a planned injection well in Highland Township, Elk County, which has also banned deep injection wells. Like PGE, Seneca filed a federal lawsuit against the township. And this has observers wondering whether DEP has shifted against permitting deep injection wells, or if they are simply avoiding the ire of both the industry and environmentalists by waiting for the federal courts to issue a decision on these ordinances.

“This is simply a unique case,” wrote DEP spokesman Neil Shader in an email. “And due to the ongoing litigation that could impact the permit application, we are electing to wait until the lawsuit is resolved.”

Back in March, the DEP took the unusual step of reversing its approval of the Grant Township waste water disposal well. The permit had been issued under the previous Corbett administration and the decision to revoke the permit took both the energy company and the opponents of the disposal well, by surprise.

Grant Township’s attorney Thomas Linzey is also executive director of the Community Environmental Legal Defense Fund (CELDF), which has taken its community rights legal strategy to municipalities around the country. He says DEP’s position has always been to ignore local ordinances, on the basis that they are pre-empted by the state oil and gas act. But he doesn’t view DEP’s decision as a vote in his client’s favor.

“Usually these permits are issued as a matter of course,” he said. “But now, this is the first time the DEP has done anything with injection wells based on local ordinances. Its not a win, it’s a punting.”

Legal advocates for the gas industry had a similar reaction.

“To be perfectly candid, I thought it was a little bit of a cop-out by DEP,” said Paul Stockman, a partner with McGuireWoods, who represents gas producers, but not the companies involved in these cases.

Rob Boulware, a spokesman for Seneca Resources, wrote in an email that DEP’s decision to delay permit decisions could result in more “costly litigation” for the state and municipalities.

“We believe Pa. DEP has misinterpreted the reach of the Highland Township ordinance, and is ignoring legal precedent and well-established regulations that preempt any municipality’s attempted regulation of oil and gas activities,” wrote Boulware.

Several attorneys interviewed for this story say the ordinances themselves would not survive constitutional challenges, nor would they stand up against the state Municipal Planning Code, which forbids outright bans on any type of activity or businesses that are sanctioned by the state.

Attorney Paul Stockman says its not easy trying to read the tea leaves of a new administration.

“I think that everybody who practices in this area is still trying to feel their way forward in terms of what the change in administration will portend,” said Stockman. “Governor Wolf has made very clear that he wants Pennsylvania to enjoy the benefits that come from shale gas production and is encouraging production,” he added. “Obviously his DEP Secretary [John Quigley] comes from a prior professional background that may cut in the opposite direction. And everyone is seeing how this shakes out.”

CELDF’s Linzey says no matter what DEP does in the end, the types of ordinances passed in places like Grant Township and Highland Township will continue pop up.

“The reason why these ordinances are surfacing is because the people have given up hope that the state is going to do anything for them,” he said. “People have given up, they’re done. And it’s a new kind of activism that’s emerging that says screw you, we’re going to make laws ourselves.”

Read the DEP letter to PGE below:

Philadelphia 'sniffing' for methane leaks ahead of Pope Francis' visit