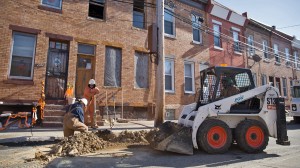 Philadelphia Gas Works says it can cut in half the time it takes to replace its leaky pipes if it raises the customer infrastructure surcharge by 2.5 percent. For the average resident who uses natural gas to heat their home, that would mean an increase of $1.65 to $1.70 each month.

“So not a huge increase per customer,” said PGW spokesman Barry O’Sullivan. “But multiplying that across our entire customer base gives us that flexibility and that freedom to be able to get that infrastructure upgraded even faster and allow our customers in Philadelphia to benefit from that newer system.”

Philadelphia has struggled to replace about 1500 miles of mains — the pipes that run beneath city streets — some of which were installed more than a century ago. These cast iron and bare steel pipes include about one-quarter of the city’s gas pipes and the leaks can be deadly. In 2011, an explosion in Allentown killed 5 people, including a newborn. Leaks also pose environmental hazards because methane is a powerful greenhouse gas, and contributes to climate change at a faster rate than CO2.

PGW has been replacing its older cast iron and bare steel pipe with the more state-of-the-art plastic pipe, but the cost is high and the pace has been slow. It takes an estimated $1 million to fix each mile of pipe. Current plans have PGW replacing all those lines within the next 88 years. But with the increase in a surcharge, known as the Distribution System Improvement Charge (DISC), the utility says it can replace those pipes within 45 years.

The proposal to increase the surcharge comes several months after the Public Utility Commission, which has oversight of the utility’s rates, set out seven alternatives for paying for a pipe-replacement program. One of those recommendations included increasing the surcharge.

The PUC’s recommendation of raising the current cap of 5% of a consumer’s bill to 7.5% predicted an influx of $11 million and a reduction of the time needed to replace all the leaking pipes to 51.5 years.

The report also recommended issuing more debt to pay for the improvements, given that its debt is projected to fall to about 56% of its capitalization by 2020, well below the 70% that the PUC estimates the utility could safely take on.

But PGW spokesman Barry O’Sullivan says raising the surcharge would prevent the utility from taking on more debt.

The attempt to speed up pipe replacement follows the failure late last year of a plan to privatize PGW, the nation’s largest city-owned gas utility. UIL, a Connecticut-based energy distribution company, pulled out of the plan in December after City Council declined to approve it, negating several years of negotiation by the buyer and the administration of Mayor Michael Nutter.

In the meantime, PGW says it has already begun to speed up pipe replacements, which has more crews out on the street.

“The most obvious impact of that right now is that you’ll see more of our crews out in the streets decommissioning older pipe, and installing the newer pipe,” said O’Sullivan.

PGW has filed a petition with the PUC to increase the infrastructure surcharge. The public will be able to comment before the PUC makes a final decision.

Study: Half of drilling jobs weren't filled by locals