Study: Half of drilling jobs weren’t filled by locals 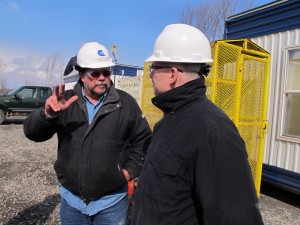 Workers at a Cabot Oil and Gas site in Susquehanna County.

It’s something Tim Kelsey has heard from people in Pennsylvania’s gas fields since the beginning of the Marcellus Shale boom.

“They see jobs being created but they also see a lot of Texas and Oklahoma and other states’ license plates,” said Kelsey, a Penn State economist. “I’ve often heard them ask: there are jobs here but how many of the jobs are going to local people?”

In a recently published study, Kelsey tried to answer the question. He and his team studied Pennsylvania Department of Revenue tax data from 2002 to 2011, the last year data were available, to see if the number of people in gas drilling counties rose during the shale boom.

“If jobs were being created and being taken by county residents, we would see that in the numbers,” Kelsey said.

But they found a lot of the jobs were being taken by people who did not live in gas drilling counties.

There’s a good reason for this, Kelsey says. Oil and gas jobs are highly specialized, and those most qualified often come from parts of the country with lots of drilling work. And they need to be able to travel to different well pads to work.

“Those workers tend to move around between well pads relatively frequently,” Kelsey said. “They’re only needed for a short time in any one place.”

But he said hiring outsiders limited the industry’s economic benefit for local communities.

“If those jobs being created are not going to local residents, they’re going to others who are coming in temporarily and then immediately leaving.” said Kelsey. “That doesn’t leave much of a benefit at all to the community.”

Kelsey said the data did not allow the researchers to track whether those outside workers were from other Pennsylvania counties. And he thinks that since 2011, a greater portion of the Marcellus Shale workforce is composed of in-state residents.

“In that time there are more Pennsylvanians who have the skills to work in the industry,” Kelsey said. “The local employment numbers would be a little bit higher than what we looked at before.”

The industry also benefited drilling communities with royalty and lease money, Kelsey said. Plus, any jobs that did go to locals were helpful, because jobs are often hard to come by in small, rural communities where most drilling occurs.

Rob Boulware, a spokesman for Seneca Resources, says most of his company’s employees are from Pennsylvania.

“Like many traditional Pennsylvania oil and gas companies, our company has a workforce that comes from a variety of places within and outside of Pennsylvania. Their work locations are in Pennsylvania and as such the bulk of those employees live within the commonwealth,” he said.

Boulware said he was recently at a well site in Elk County where eight of the 12 workers lived at least 100 miles from the well site. “I’ve got guys from Elk County working in Lycoming County,” he said.

The study, published in Agricultural and Resource Economics Review, comes out as the state debates whether to impose a severance tax on natural gas drilling. Drilling advocates say a tax would kill jobs.