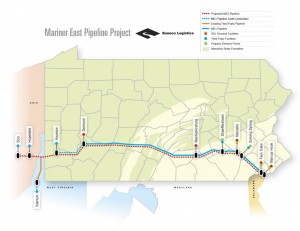 An environmental group is suing Sunoco Logistics over its plan to use eminent domain to obtain land that would allow it to build a 350-mile natural gas liquids pipeline across southern Pennsylvania.

In the suit, filed Thursday, the plaintiffs argue that the proposed Mariner East 2 pipeline that would run across the state to Marcus Hook near Philadelphia is an interstate entity because it would extend to Ohio, West Virginia and Delaware, and therefore is regulated by the federal government which does not confer public utility status.

The complaint argues that the natural gas liquids that would be carried by the pipeline are regulated under the Interstate Commerce Act which confers no eminent domain rights.

Even if it was determined that the pipeline would operate entirely within Pennsylvania, the company would not be entitled to assert eminent domain because it has not sought or been granted a certificate of public convenience – which would authorize eminent domain proceedings – from the state’s Public Utility Commission, the plaintiffs say.

Sunoco, which asserts that it does have public utility corporation status, issued a statement saying it will fight the suit.

Nils Hagen-Frederiksen, a spokesman for the PUC, confirmed that the commission ruled in 2002 and again in 2014 that Sunoco does have public utility status. He noted that the PUC has no role in eminent domain, which is determined by the courts.

The suit adds to the pressure on Sunoco from landowners along the pipeline who are challenging eminent domain actions. Michael Flaherty, an attorney for about 120 of the landowners, said the PUC’s affirmations of public utility status applied only to its existing Mariner East 1 pipeline that operates within Pennsylvania, and is not applicable to the planned Mariner East 2 because that would extend beyond state boundaries.

Flaherty accused Sunoco of seeking to apply the PUC rulings to Mariner East 2, and said its stance was “blatantly false.”

Flaherty said he was not involved in the filing of the Clean Air Council suit but said he had been talking with the group about the eminent domain issue, and said it had used some of the same arguments that he is applying for his clients – 20 of whom have now been served with condemnation papers as part of Sunoco’s eminent domain proceedings.

In its 53-page complaint, the Clean Air Council says “dozens” of eminent domain actions are now underway against landowners who have refused Sunoco’s offers of compensation for building the $2.5 billion pipeline through their properties.

Alex Bomstein, senior litigation attorney for the environmental group, said the suit aims to stop the company from using eminent domain to build the pipeline if it is unable to obtain easements from landowners.

Asked whether the suit’s underlying aim was to prevent the pipeline from being built, Bomstein said the company might have to rethink the project if it was unable to use eminent domain to obtain land.

“If Sunoco doesn’t have the right to eminent domain, it’s going to have to reconsider whether it has the ability to construct the pipeline that traverses the state,” he told StateImpact.