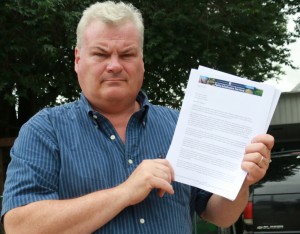 Scott Cannon holding a letter of acceptance to the DEP's pipeline task force.

Scott Cannon, an anti-fracking activist, says he wants to get to the bottom of why he was uninvited from Governor Wolf’s new Pipeline Infrastructure Task Force.

But he hasn’t gotten there yet.

Cannon, 51, of Plymouth, was originally told that he would be a part of the task force environmental protection workgroup.

But Cannon was informed a few days later by Department of Environmental Protection Secretary John Quigley that his services would not be needed. So he filed a Right-to-Know request, and recently got a slew of redacted emails.

But those that weren’t redacted reveal a flurry of interest about Cannon’s candidacy.

The first email came July 2 from Richard Fox, a staff member for Senate Minority Leader John Yudichak (D-Luzerne), asking Sarah Clark, DEP’s Legislative Affairs Director, “do you know if Scott Cannon is on the task force or one of the work groups?”

Clark responded that Cannon was on the environmental protection workgroup.

That would soon change. Two hours later, an email from a staffer for Gov. Wolf, Yeseñia Rosado Bane asked: “Can someone from DEP uninvited {sic} Scott Cannon to the task force?”

Calls to Bane were not returned.

By the afternoon, an email from Neil Shader, a press officer in the DEP, was circulated to other agency staff stating Quigley was withdrawing Cannon from the working group.

“[A]pparently his inclusion on the workgroup list was oversight (not on DEP’s part),” Shader wrote. A later email from Quigley said “I suspect he will run to the press. If asked, the less said on this, the better, in my view.”

The emails don’t explain why Cannon was taken off the list, or why Fox, Yudichak’s staffer, had asked about Cannon. Cannon thinks the redacted emails could explain his snub, and he may file an appeal of the redaction with the state’s Office of Open Records.

“Somewhere between Richard Fox and the governor’s assistant is the reason why I was taken off the panel,” Cannon said. “Some of the information in the Right-to-Know request was redacted so I don’t know what was said. That answer is in those files.”

But the answer could lie with Cannon himself. Although he said he didn’t know why Yudichak’s staff would be asking about him, he did say he had publicly criticized Sen. Yudichak’s positions on oil and gas development, including Yudichak’s support for a pro-drilling group called United Shale Advocates.

But Cannon doesn’t want to point fingers at the senator just yet. “I’m not accusing John Yudichak of anything because there’s no evidence that he did anything wrong,” he said. “It came from the governor’s office and I have to find out who is the one that put up the red flag.”

Cannon, a filmmaker who recently produced a documentary called The Ethics of Fracking, applied to be on the task force as a representative of the Gas Drilling Awareness Coalition–a group that opposes drilling. The organization recently settled a lawsuit against the state after it was erroneously labeled a terrorist organization.

State officials say Cannon’s snub was simply a matter of trying to get the make-up of the task force right. The state web site lists 12 working groups on the task force, with 150 members total. 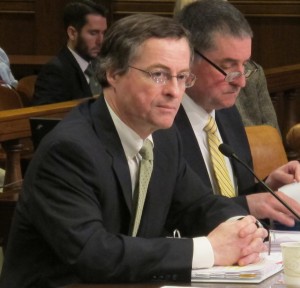 DEP Secretary John Quigley informed Scott Cannon he would not be on a pipeline working group.

Cannon, who has made over 50 internet videos showing adverse effects of gas drilling, pipelines, and related infrastructure, said he was initially surprised that he’d been chosen to be on the task force.

“When I first got the email saying I was on the task force I was very surprised, because I do have an anti-pipeline stance. But I was also grateful for them to be able to look at my view,” he said. “I thought they were going in the right direction by hearing all the voices.”

But when he got dismissed from the task force, his hopes were smashed.

“I was very disappointed in the answer I got from the DEP. They lied to me,” Cannon said.

Richard Fox, the Yudichak staffer who originally asked about Cannon, said he didn’t ask that Cannon be taken off the list.

“We were simply inquiring if our constituents were appointed and what committees they are on,” he said. Fox said Cannon was not singled out. The July 2 email “was one of several routine inquires we made to DEP regarding candidates for the Pipeline Infrastructure Task Force,” he said. “I had heard that Mr. Cannon was appointed and just wanted to verify that with DEP. Our office always likes to know when constituents are appointed to boards and commissions.”

Fox said he’d also checked in on five other candidates from Yudichak’s district that his office had recommended to the task force.

Asked why Cannon was taken off the group, DEP press secretary Julie Lalo said in an email: “After further consideration of the overall composition of the Task Force, the Secretary decided against adding this individual as a member. While we appreciated his willingness to serve, we felt others on the Task Force would better represent the wide range of citizen perspectives on pipelines.”

State Rep. Jerry Mullery, D-Luzerne, one of the legislators who recommended Cannon to the task force, said he didn’t like how Cannon was treated. “I don’t like uninviting somebody you’ve invited,” he said. “If they felt there were something wrong with his qualifications, I would have liked it if they would also have contacted me, but I was never contacted.”

Mullery got to know Cannon when he shot a political ad for Mullery’s campaign. He said he always found Cannon to be “professional” and “conscientious”.

“Is he passionate about the issues?” Mullery said. “Yeah. He cares. He cares about the environment of Pennsylvania. I would think those are the types of people you’d want on there.”

Read the emails below: