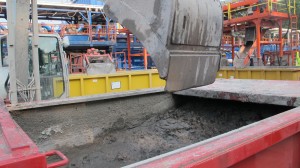 Drilling waste at a site in Tioga County.

Seven environmental groups on Wednesday threatened to sue the U.S. Environmental Protection Agency for allegedly failing to update a law on the disposal of oil and gas waste to reflect the fracking boom of recent years.

The organizations, which include Pennsylvania’s Responsible Drilling Alliance, said they sent an Intent to Sue notice to the EPA and will file it in 60 days’ time if the agency does not review and revise regulations under the Resource Conservation and Recovery Act, a 1976 law that requires the agency to review the regulations every three years but which, the environmental groups say, it has failed to do.

Existing regulations under the Act are too weak to prevent the spread of toxic waste materials such as benzene and mercury that are produced by the fracking boom of the last 10 years, and which are still classified as non-hazardous waste which includes household trash, the groups said.

They called on the EPA to use the law to stop drillers spreading fracking waste water on fields and roads; to require landfills and ponds that receive fracking waste to install liners that prevent leakage, and to control the dumping of waste in deep injection wells, a practice that has been linked to earthquakes in several states.

“Right now, this waste, complete with carcinogens and radioactive material, is being dumped irresponsibly or disposed of like everyday household garbage,” said Matthew McFeeley, an attorney at the Natural Resources Defense Council, one of the advocacy groups. “Toxic waste should not be sent to run-of-the-mill landfills, sprayed on our roads, or stored in open-air pits.”

The EPA said it would review the Intent to Sue and noted that it proposed last spring a rule that would ban the discharge of pollutants from unconventional oil and gas operations into municipal treatment plants.

Responding to concerns that fracking waste disposal has resulted in seismic activity in some places, the agency also said it has tasked a national workgroup on underground injection control (UIC) with looking at ways of mitigating those risks.

“EPA will continue to work with the states and organizations such as the Ground Water Protection Council and the Interstate Oil and Gas Compact Commission to ensure that the latest information and tools are made available to UIC directors to address potential concerns related to injection-induced seismicity,” said the EPA’s deputy press secretary, Laura Allen, in a statement.

Adam Kron, an attorney with the Environmental Integrity Project, said the EPA’s response only addressed pieces of the waste issue, and that a comprehensive approach on the waste stream was needed.

Kron said the EPA determined in 1988 that its regulations under the law needed to be reviewed but that has not happened despite the proliferation of waste from the fracking boom.

“Twenty-seven years later we are still waiting for these rules, and the oil and gas industry is generating more waste than ever before,” Kron told reporters during a conference call.

The advocates cited incidents in five states including Pennsylvania where a pond holding 6 million gallons of fracking waste water leaked pollutants including strontium and arsenic into groundwater and a nearby stream in Tioga County in 2012. In that case Pennsylvania officials sought a $4.5 million fine against the company EQT, and filed criminal charges.

“EPA should revise existing regulations and specifically address issues relevant to the modern oil and gas industry,” she said, in a statement.

Fracking waste includes TENORM – technologically enhanced naturally occurring radioactive material – which in Pennsylvania is disposed of in municipal landfills that are permitted and monitored by the Department of Environmental Protection.

Neil Shader, a spokesman for the DEP, said the radioactive waste was accepted at 21 Pennsylvania municipal landfills in the first half of 2015 under a program called the Radiation Protection Action Plan.

Shader, speaking before Wednesday’s statement by the environmental groups, said the department regulates the amount of TENORM that each landfill can accept each month, and that none of the 21 landfills exceeded their allocation in the first half of this year.

Radiation levels are monitored by each landfill and alarms will go off if levels exceed a limit set by DEP, Shader said. He cited a DEP study in January this year that found “little potential” for radiation exposure to landfill workers or the public as a result of handling wastes containing TENORM.

DEP does not classify TENORM as hazardous waste, in accordance with EPA standards, but some environmental advocates argue that the material should be treated as such.

John Stolz, a professor of biology at Duquesne University in Pittsburgh, said the radioactive elements present in TENORM include radium 226, which has a half-life of 1,600 years.

“So the more you put in landfills, the hotter (radioactively) the landfills become,” he said.

DEP estimates that TENORM represented 1.2 percent of oil and gas waste disposed of in Pennsylvania landfills in 2012, and 0.8 percent of total waste.

Kron of the Environmental Integrity Project called on the EPA to “flip that switch” and declare TENORM a hazardous material.

Asked whether it was realistic to expect EPA to review its regulations within 60 days, McFeeley of NRDC said the advocates would consider not filing their lawsuit if the agency makes a “credible commitment” to such a review.

“We recognize that the rulemaking process takes time,” McFeeley said.

The other groups in the initiative are Earthworks, San Juan Citizens Alliance, West Virginia Surface Owners Rights Organization, and the Center for Health, Environment and Justice.