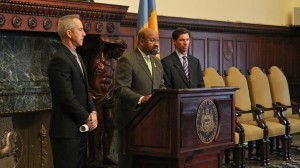 Philadelphia Mayor Michael Nutter joined with his counterparts in Houston and Los Angeles on Tuesday to call on other cities to implement climate action plans in the run-up to global climate talks in Paris in December.

The three mayors urged other cities to set carbon emission targets, establish a U.S. template for climate action plans, and set a protocol for carbon offsets in municipalities.

In a joint statement, the mayors praised recent federal climate-change initiatives such as the Clean Power Plan to reduce emissions from power plants, and measures to cut methane leakage from natural gas infrastructure, but said cities, which generate 70 percent of U.S. greenhouse gas emissions, can do more.

“These actions are big steps forward but we need Congress to step up and support binding U.S. greenhouse gas reduction targets,” the mayors said.

The three Democratic mayors, who co-founded the 28-city Mayors National Climate Action Agenda, are pressing for global policies to curb climate change in the face of what they called gridlock in the Republican-controlled Congress, but they denied that their initiative was inspired by politics.

“Climate change isn’t a political issue – it’s a reality for cities, many of which are right now enduring drought, extreme weather, and wildfires as a result,” they said, in a joint statement.

To advance their call for action, the group announced a #ClimateMayors campaign on Twitter in the 100 days before the United Nations Framework Convention on Climate Change (COP21) at which world leaders will try to agree on cuts in global carbon emissions.

“We call on our federal leaders to pursue the strongest possible agreement in Paris and urge our fellow mayors to help us convey this message by signing the Compact of Mayors, committing to city-level climate action plans,” the group said.

“Senator Casey continues to make a case for a more a comprehensive approach to addressing climate change on a national level,” Rhoads said. “The strides the city mayors made today with the launch of their campaign to enact change is commendable but further action still needs to be made.”

Representatives for U.S. Senator Pat Toomey, a Republican, could not be reached for comment.

In Philadelphia, city authorities are pursuing climate mitigation through Greenworks, a wide-ranging sustainability program, now in its seventh year, that has worked with climate scientists to formulate projections for the region.

City departments have been integrating climate considerations into policies over the past year, the statement said. This fall, the City is due to publish a report on climate risk and opportunities for action.